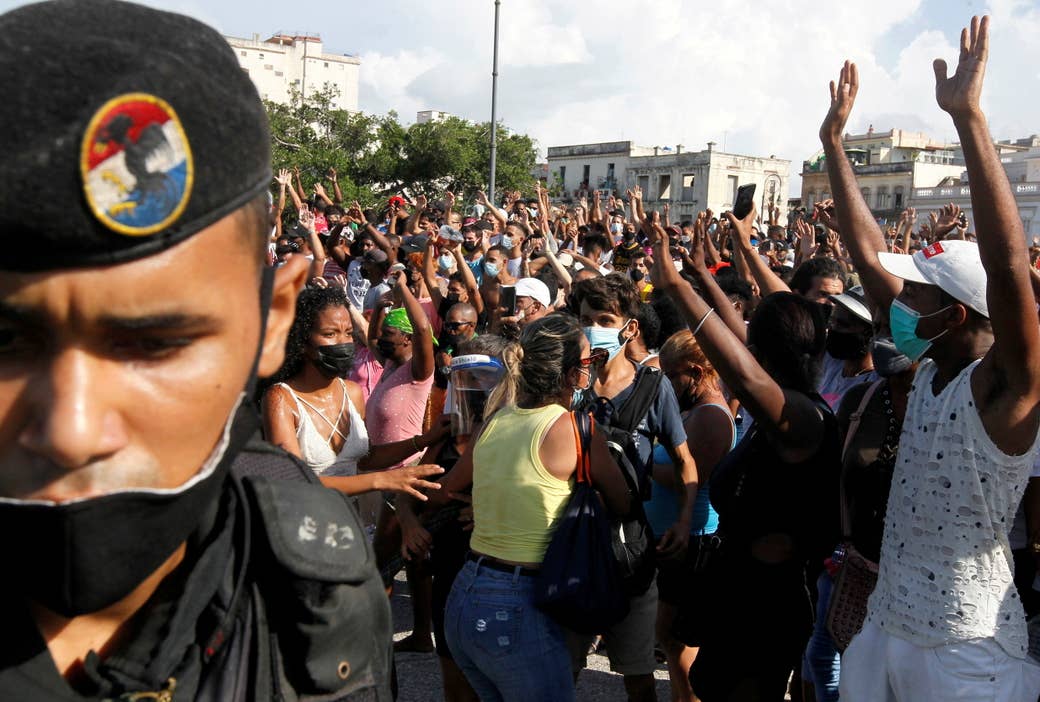 People react during protests against and in support of the government in Havana, Cuba, on July 11, 2021.

Anti-government protests have erupted in Cuba this week over the lack of access to food and basic medical supplies amid a rise in COVID cases.

The country has suffered from massive inflation and long blackouts as long-standing US sanctions that restrict access to basic goods and financing, and decades of government corruption and mismanagement, have been made worse by a decline in tourism during the pandemic.

The protests started on Sunday and have spread rapidly across the country as thousands of Cubans are frustrated by hunger and basic supply shortages. “Our children are dying of hunger,” shouted one protester in a video posted to Facebook. Another video on Twitter appeared to show protesters calling to “change the system.”

The protests are the largest in recent memory, and government forces, which are typically quick to repress demonstrations, initially struggled to retain control. Some musicians, who along with artists faced suppression for speaking out, also made statements in support of the protesters.

Intermittent internet shutdowns and harassment and detention of journalists have made it difficult to verify events on the ground; however, photos and videos have emerged showing both uniformed and plainclothes officers beating protesters with batons and appearing to shoot at them. At least one person has been killed, and Amnesty International said that at least 150 others have been reported missing and may have been detained.

While the government appears to have softened its stance somewhat, lifting a tax on importing goods to the island, it may not be enough to quell the protests. “No, we don’t want crumbs. We want liberty. Blood has not run in Cuban streets to be able to import a few more suitcases,” tweeted blogger and government critic Yoaní Sánchez.