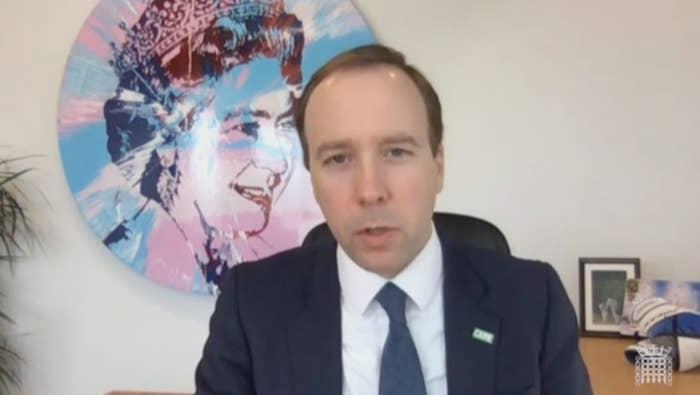 The health secretary Matt Hancock has confirmed that the number of deaths from COVID-19, the disease caused by the novel coronavirus, in care homes is likely to be higher than those reported by the Office for National Statistics (ONS).

At a virtual meeting of Parliament’s health and social care committee on Friday, committee chair Jeremy Hunt said the ONS statistics show there have been 217 care home deaths to date.

He then faced criticism from Hunt for the government’s failure to reveal care home deaths along with hospital statistics on a daily basis.

Hancock said the government was working to improve reporting on deaths in residential care.

“I have asked the CQC to make sure we record the deaths of those who are residents of care homes,” he said. “They started to collect that data yesterday and it will start to be published shortly.”

Hancock also defended the government’s record on testing after it emerged only 18,000 tests were carried out yesterday, well short of the 100,000 tests-a-day target he has set for the end of April.

Hancock described drive-through testing centres as a “big policy success,” but MPs grilled him on his failure to improve on numbers with just two weeks for the government to meet its pledge of 100,000 tests a day.

Hancock said around 18,000 tests had been carried out yesterday, with the majority in NHS laboratories, and said testing capacity was now at around 30,000. He insisted the government was still on course to hit its target of 100,000 tests per day by the end of the month — which means it will have to more than double testing capacity in less than a fortnight.

The health secretary also announced that testing would be rolled out to other public service workers, including firefighters, police, the judiciary and prison officers, and critical local authority and Department for Work and Pensions staff from today.

In response, Conservative backbencher Laura Trott asked: “We have capacity for 30,000 tests, and we’re carrying out 18,000. I know my local CCG has said they’ve got capacity for huge amounts of more tests than are actually being carried out.

“I know from today, from the expansion, which is very welcome, to local government, firefighters, etc, that will take up some of that excess capacity, but what is being done centrally to make sure we’re using resources where they’re needed?”

Hancock said using the capacity was a “real challenge”, and suggested that one reason the government was falling behind was a lack of uptake from health workers, adding that the Easter bank holiday could have limited the numbers of people coming forward.

“Within the NHS, the number of staff coming forward for testing is lower than was anticipated,” he said.

“You’ll understand why we had a priority order for the use of the test where it was patients first, then NHS staff. Frankly, the number of NHS staff coming forward wasn’t as high as expected and therefore we extended it very quickly both to residents and staff in social care.”

Hancock added that the Department of Health staff were also working to ensure that supply and demand were adequately matched at centres around the country.

Labour MP Rosie Cooper told the health secretary that NHS staff were struggling to access the drive-through testing centres that the government had set up.

“The testing centres that have been set up in out-of-town areas,” she said, “it could only have come from the centre — somebody who’s got no idea locally how people are supposed to travel miles and miles and miles to get tested — they might as well be on the moon frankly.”

In response, Hancock said: “We’ve now got 22, we’re going to have 50 right across the country, that’s precisely to get the testing capabilities out into the community, and then once we’ve got those established, we’re going to have mobile units, and then when the technology is good enough we will have home testing kits as well.”

The health secretary also admitted that he did not know how many NHS workers had contracted the virus so far.

“What I have is an estimate of the proportion who are off work because they either have suspected COVID-19 or a household member does, which is a little over 8%. And obviously with the expansion of testing, we hope to be able to get that figure down.”

Hancock told MPs that there were still ongoing problems with PPE supply. “We are tight on gowns,” he said. “That is the pressure point at the moment. We have another 55,000 gowns arriving today and we’re working on the acquisition internationally of more gowns, but it is a challenge.

“And this follows changing the guidance 10 days ago which increased the advice on the use of gowns but also said that they should be used for sessional use rather than for individual patient use. And it is a big challenge delivering against that new guidance and we’re doing everything we possibly can.”