The coronavirus pandemic has put immense pressure on our health systems and the global economy, but you already knew that.

Less discussed is the strain on the already delicate relations between walkers, runners and cyclists.

Leichhardt resident Scott Rhodie was riding along Sydney’s Bay Run track the other day when a guy who had been running in the cycle lane peeled off to the right to overtake two other bikes that had briefly stopped.

“I shouted at him, ‘on your right’, to let him know I was coming up,” Rhodie told BuzzFeed News. “And he turned around and he was like, ‘fuck you, I’ll do what I want’. I was like, ‘this is the cycling area’. He said, ‘get off your fucking bike and I’ll fight you’.

“And I was like, ‘mate, don’t be a fucking fanny’, because I’m from Scotland and I don’t really mess about with that shit. All the pedestrians kind of laughed. As if it was his right to be wherever the fuck he wanted!”

For weeks now, Australians have been told to stay at least 1.5 metres away from each other and to leave the house only when essential, like to exercise. But with gyms and group exercises classes out of the picture, the pickings are slim.

It means that, ironically, just as we’re all meant to be staying home and staying away from each other, parks are filling up with runners, walkers and cyclists competing for space. 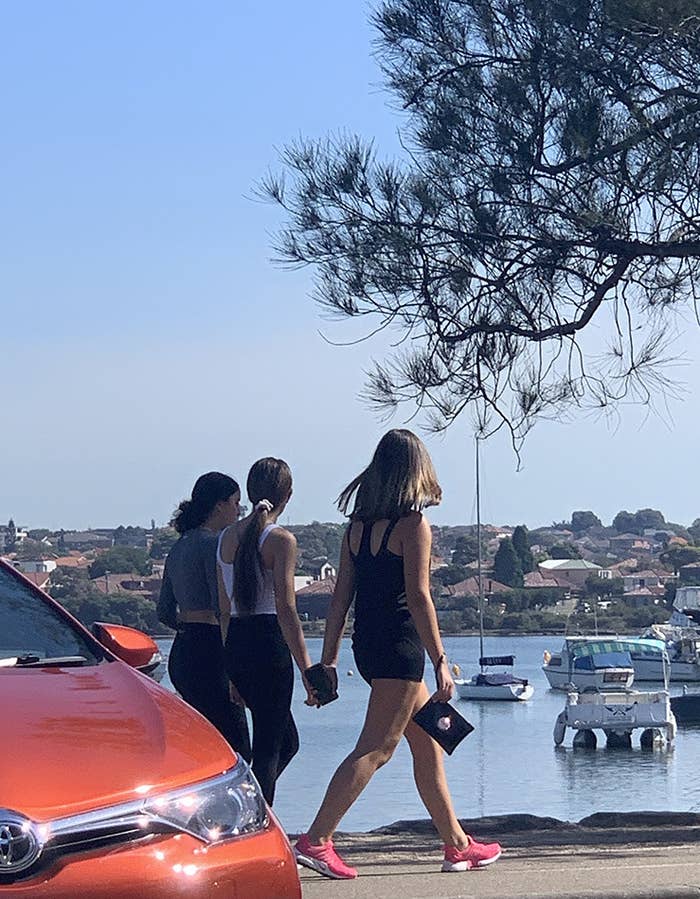 In Sydney, the Bay Run — a 7km loop around the Parramatta River in the inner west — is ground zero for this clash. Normally, it’s *kisses fingers*: no traffic lights, mainly flat, the chance to see fish jumping out of the water. But now, it’s a battlefield.

(Full disclosure: I am a runner and I have been known to run the Bay Run.)

As well as in altercations down by the bay, the fight is piping hot online — in community Facebook groups, comments on the local mayor’s Facebook posts, on Twitter and Reddit. Everyone agrees: the run is overcrowded and some people aren’t respecting social distancing. But who you blame mostly depends on your tribe: runner, walker or cyclist?

This cyclist, for example, has had enough of people casually strolling as they talk shit while sipping coffees.

Rhodie has encountered irresponsible walkers too. As he cycled down a hilly part of the path recently he had to slam on the brakes, leaving skid marks, when a guy strolled in front of him.

“I said, ‘ah mate, this is a cycling area’,” Rhodie said. “He went, ‘oh, coronavirus mate, I’ve got to be a metre away from everyone. I might die.’ You might die by being hit by my bike at 25 kilometres an hour.”

Walkers walking up to four abreast have also copped it. Is it even “exercise”? This person in an inner west Facebook group has their doubts.

Haberfield local Jane Nicholls likes to take her schnoodle Jack for a walk along part of the Bay Run, to a beach area where he can have a swim. While acknowledging not all fellow walkers are innocent — she takes issue with “wide walkers”, a phrase she adopted eagerly after seeing it in a tweet — she told BuzzFeed News the number of runners taking up space has increased in recent weeks.

“All these joggers are just running straight at you, not trying to get out of your way,” she said. “My dog is like, why are we stopping and pulling over all the time?”

Many online also lay the blame on runners, who stand accused of huffing and puffing — or “breathing their soul” onto others, as one Redditor put it.

Runners are “spitting out germs” when they run past others, according to this person (who has “walker” written all over them). 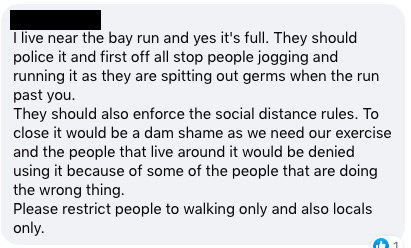 Runners and cyclists have sustained even more reputational damage in the last week, because of a widely reported study that suggested their droplets can spread the virus even if social distancing is observed. The study’s lead researcher has since said he was not discouraging people from doing these kinds of exercise.

Gus McCubbing, a Lewisham resident, is a Bay Run runner, doing the track every second day at the moment.

“It’s definitely more chockers than normal. It’s no-one’s fault, everyone’s just got to figure out a way to co-exist,” he told BuzzFeed News. He’s been making a concerted effort to run around others on the path, leaving a wide berth. But it’s not always straightforward.

“There are some times when you’re running straight at a group of people and you have to decide who’s going to move,” he said. “If it’s a middle-aged white dude you know they’re just not going to move.”

McCubbing has taken to running in the left side of the cycle lane, which he thinks is the safest thing to do — leaving the pedestrian lane to slower walkers but keeping him visible to cyclists coming up behind him.

But it leaves him vulnerable to cyclists sweating and breathing on him, if what this Twitter user says is true:

@apiotrowski9 The joggers and cyclists on the bay run did. my. head. in. No social distancing. Would sweat and breathe all over you. Sneak up from behind, and brush past. Infuriating.

Cyclists have never been that popular in Sydney. But now people want them out of the Bay Run completely.

Other more generous souls have suggested banning bikes only on the weekend or enforcing a speed limit so cyclists don’t treat the run as their own personal training track.

Sometimes the distinctions people draw in the debate seem arbitrary.

It’s all getting so heated, some are even calling for the police to come and sort the mess out — which they kind of are.

@nswpolice Please stop fining people eating kebabs alone on benches and do more to enforce social distancing in places like the Bay Run. Too many people are putting on activewear and going for their walk/jog the scenic way in this pandemic:
https://t.co/IPcb41EhgC

Should the Bay Run area be closed to cars? Should all traffic be clockwise?

City of Canada Bay mayor Angelo Tsirekas says the Bay Run may have to close completely, and has encouraged people to stay away. “We have said consistently that if users cannot abide by social distancing protocols or other relevant directives from NSW Police and health authorities we would be forced to restrict access to the Bay Run,” he told BuzzFeed News. “I would hate to see the Bay Run closed for the first time but it’s not out of the question.”

Everyone BuzzFeed News spoke to for this story agreed that the run should stay open.

“It’s such a precious part of the world and it would drive me nuts if they closed it,” Nicholls said, though admitting she found it stressful at the moment and is approaching the path only with trepidation.

She has taken to walking other routes, and it’s not all bad. “I saw superb fairy wrens on [another local path] this morning,” she said. “That was the absolute highlight of my day.”