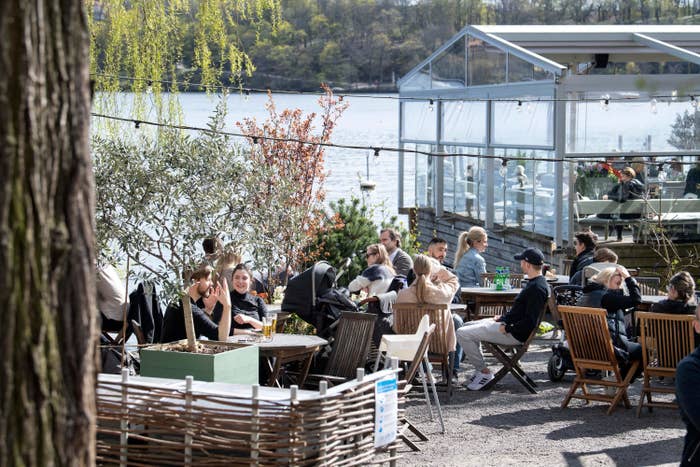 People sit in the spring sun at a restaurant in Stockholm, April 26.

Sweden and Denmark both had relatively mild flu seasons this winter, with fewer people dying compared to recent years. Then COVID-19 struck, and the neighbouring countries adopted very different strategies.

While the Danes were among the first in Europe to go into lockdown, Sweden opted for the herd immunity approach, making it one of the few advanced economies in the world to do so. There was no strict lockdown, and social distancing was recommended but not dictated.

A visiting ban at care homes was introduced at the beginning of April to protect the elderly, gatherings of more than 50 people were prohibited, and universities and colleges were recommended to offer remote learning.

But otherwise, life carries on essentially unchanged: Most schools, restaurants, bars, clubs, and gyms are open, and people are practising social distancing.

A lot has been said and written about Sweden’s strategy. Its outlier status has been met with horror by some, curiosity by most, and applause by those pressing their own governments to lift restrictions that are having a destructive effect on economies and societies. With the leaders of the UK, the US, and other countries under increasing pressure to scale back their lockdowns, the question of whether Sweden’s approach is working is of international concern.

BuzzFeed News has analysed data published by the official Swedish statistics office and other available figures in an attempt to answer that question. The answer is not encouraging: We found that the country recorded a record number of excess deaths in the first three weeks of April.

And on Monday, the Swedish statistics office said the number of deaths recorded in the week ending April 12 was the highest this century, surpassing a milestone set in the first week of 2000 when 2,364 people died. Three of the four weeks with the highest death tolls in the past two decades have occurred this month.

A bridge away in Denmark, the numbers tell a very different story. Statistics Denmark recorded 201 extra deaths over the same three weeks compared to a five-year average, an uptick of 6.5%. The contrast with the recent past is minimal. Even taking into account population size — Sweden is home to 10.3 million people, Denmark to 5.8 million — the gulf between the two countries appears stark.

The full extent of the impact of COVID-19 will not be clear for many months, maybe even years — but for now, the two Nordic countries are on different paths, not only in how they are fighting the coronavirus but also on the results so far.

Denmark’s approach has been much stricter than that of its neighbour. It announced the closure of schools, gyms, restaurants, cafés, and borders on March 11, as well as a ban on gatherings of more than 10 people. The country started easing restrictions on April 15, reopening schools as a first step. 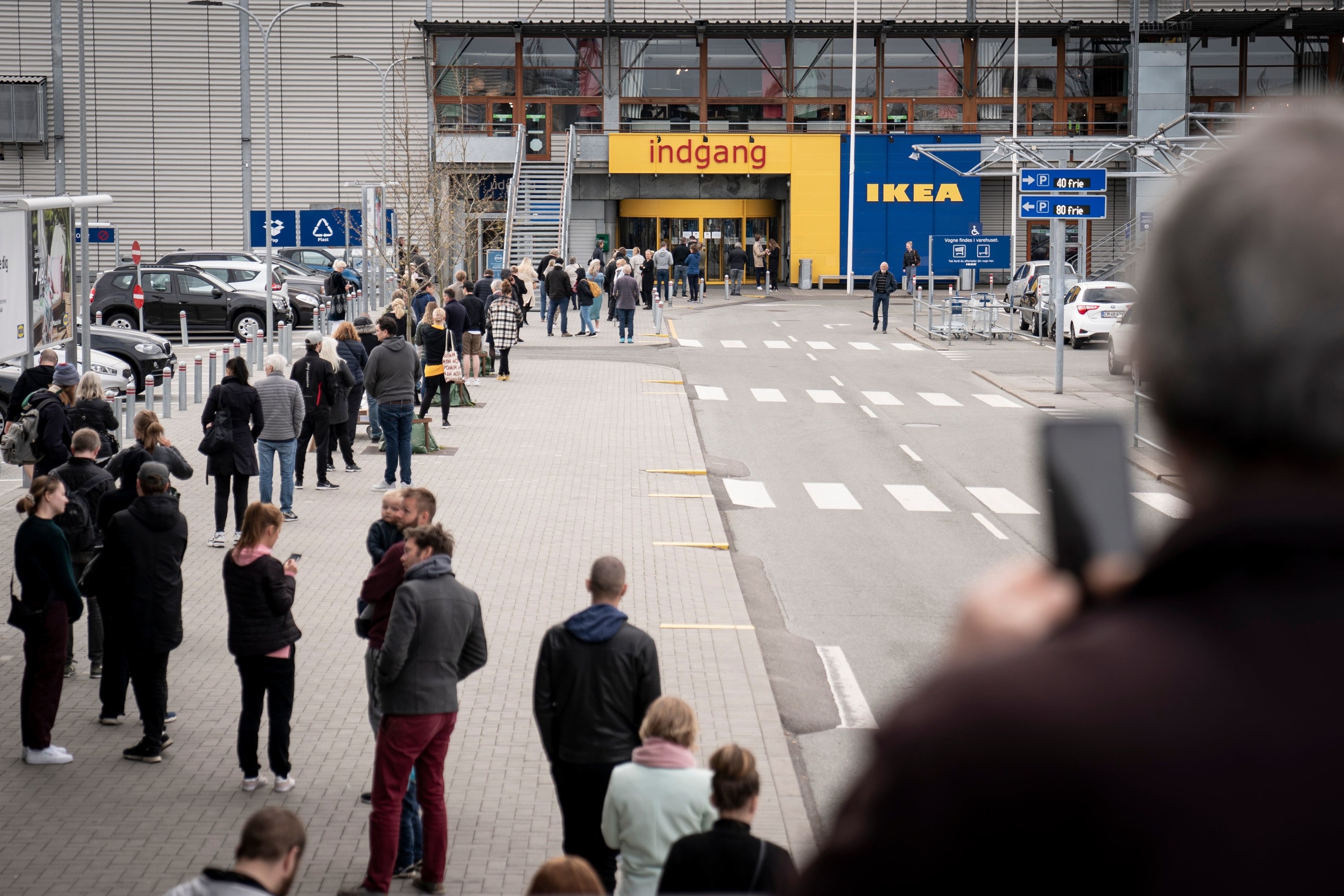 People keep their distance as they queue outside an Ikea in Gentofte, near Copenhagen, April 27.

An accurate like-for-like comparison between countries is complicated.

Figures published daily by governments, which include deaths and tests conducted, are often recorded differently in different countries. There are then specific circumstances — such as where and when transmissions occurred in a community, demographic factors like the age composition of a population, and the capacity of health care systems to deal with a pandemic — all of which vary between countries.

That’s why a metric known as “excess mortality” is seen by much of the scientific community as the best measure of the true death toll linked to the novel coronavirus outbreak, even though the exact cause of every death is not known.

Excess mortality is the least imperfect of measures. It looks at how many people have died on top of what would normally be expected at any given time of year by measuring the gap between the total number of deaths, regardless of cause, and the historical average for that place and time of year. David Spiegelhalter, a professor at Cambridge University, describes the metric as “the only unbiased comparison”. 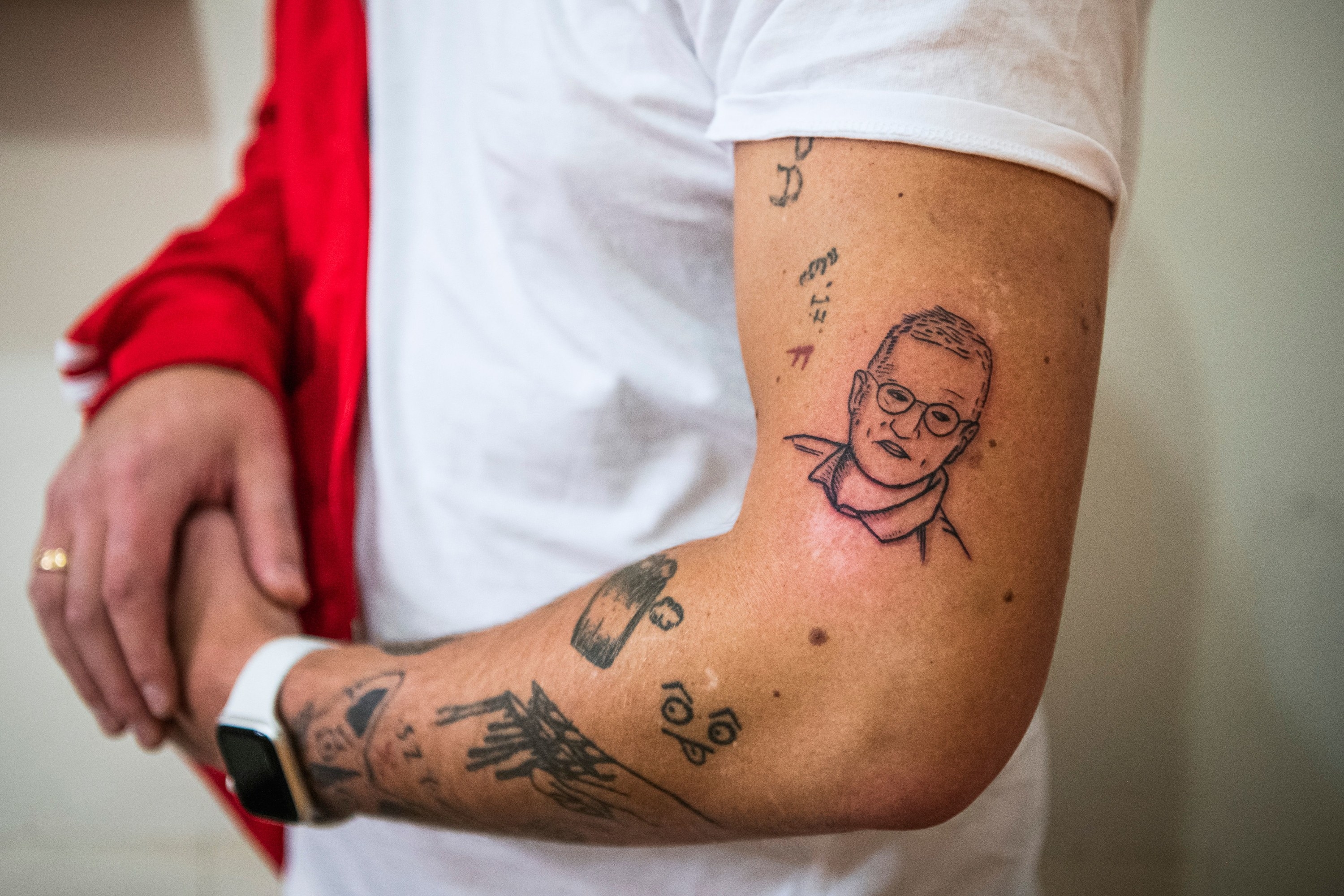 Sweden’s policy remains popular with the vast majority of voters, despite coming under some criticism from parts of the country’s scientific community. Backing for prime minister Stefan Löfven has soared, and state epidemiologist Anders Tegnell, the public face of the country’s fight against the virus, is a household name.

And there are some nuances to the reality of the policy, as opposed to how it is often portrayed. Sweden has, for example, seen a substantial reduction in mobility, despite having mostly voluntary measures in place.

According to reports published by Google that use data from Google Maps to measure mobility trends, places like restaurants, cinemas, and other retail and recreation locations saw a 22% drop by April 1 relative to a baseline of usual activity. Transit stations and workplaces fell 38% and 29% respectively, while parks and places of residence rose 27% and 11%.

Data produced by Apple paints a similar pattern in Sweden’s capital, Stockholm: Driving was down 21%, walking 36%, and public transport saw a 52% fall. Corresponding figures for Copenhagen show sharper falls, though the gap has narrowed as lockdown measures in Denmark are gradually relaxed. 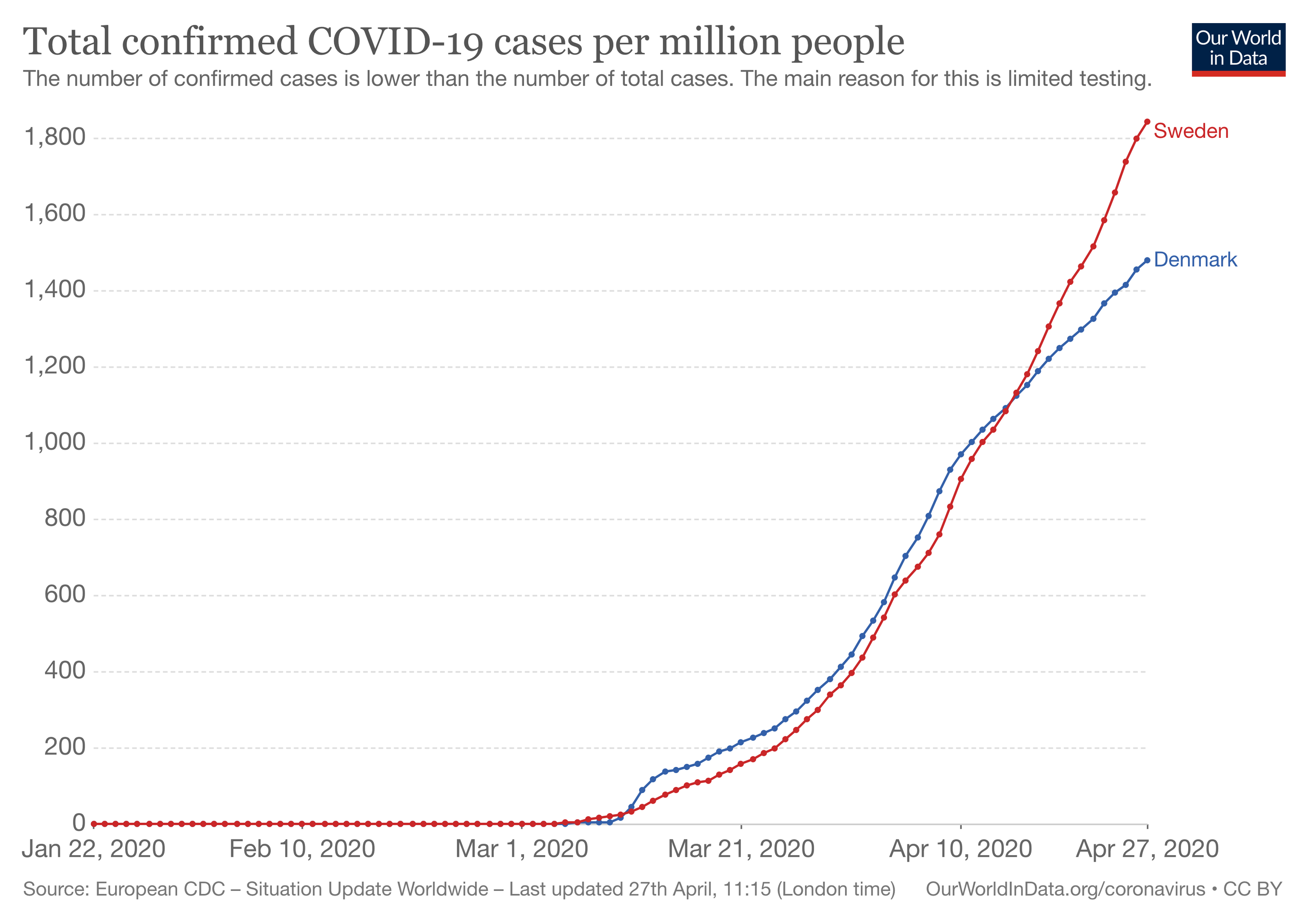 Our World in Data / Via ourworldindata.org

The number of people who have officially tested positive for the coronavirus in Sweden and Denmark isn’t that different.

However, below the surface of all these topline numbers, there are significant differences.

A comparison between countries based on the number of officially counted positive cases alone is an imperfect exercise because it is largely linked to the number of tests a country carries out. If fewer tests are conducted, the chances are larger that positive cases are being missed. This has been a particular issue in the UK, which stopped all community testing when the virus took hold and is only now trying to scale it up again but remains well short of the government’s official target of 100,000 tests a day by this Thursday, April 30.

Although the World Health Organization hasn’t taken a side on the merits of a lockdown, the global health body has repeatedly stressed the importance of aggressively testing at scale.

At a press conference last month, the WHO said testing at the level of 10 negative tests to one positive should be seen as a general benchmark of a system that’s doing enough tests.

On that measure, Sweden is falling short. As of April 19, the most recent date with comparable figures available, about 14.5% of people tested in the country had tested positive for the coronavirus, compared to some 7.5% of people tested in Denmark. According to records collected by Our World in Data, relative to population size, Sweden had tested 9.4 people per 1,000 by that date, and Denmark had 16.3 people.

These metrics suggest that many more people have had the virus than official figures suggest.

But it is death count where the comparison between the two countries is most striking.

According to the latest official coronavirus figures published by each government, 2,194 people have died in Sweden and 422 have died in Denmark. A seven-day rolling average of confirmed COVID-19 deaths compiled by Our World in Data shows Sweden’s rate at 9.6 deaths per million and Denmark’s at 1.8 — and the gap between the two countries has widened this month. 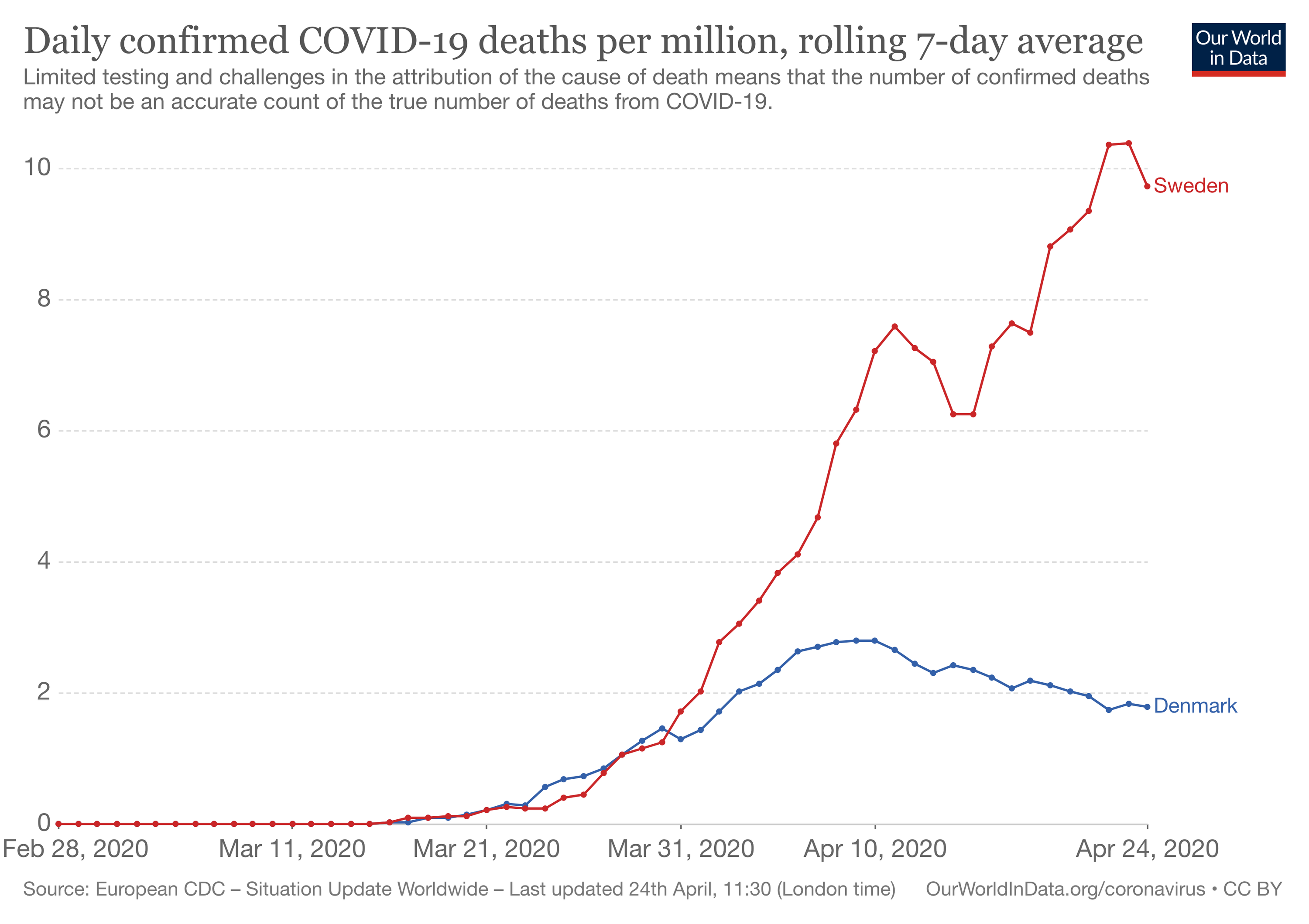 Our World in Data / Via ourworldindata.org

Given the lagging nature of mortality data, the true death count from the pandemic in both countries is likely to be revised upwards over time.

Similarly to the number of positive cases, a comparison based on the number of deaths that are published daily isn’t straightforward. The initial figures are fed from a limited number of more readily available sources, such as hospitals. Determining and certifying a cause of death takes time and isn’t always a comparable process across countries. Governments record and present daily figures differently. Some, for example, only count deaths occurring in hospitals.

This is why mortality figures published by national statistics bodies are a better measure to make comparisons. Over time, they record all deaths that have taken place in a country, indicating a cause of death when possible. Excess mortality will capture both those who died directly from the coronavirus as well as those who have died for reasons linked to the pandemic — for example, whether people didn’t seek or receive medical attention for other illnesses.

The number of deaths recorded in Sweden in the first three weeks of April are 2,354, 2,505, and 2,310, respectively, which equates to 530, 755 and 558 excess deaths compared to the average between 2015 and 2019 for those same three weeks. All three weeks saw more deaths than previous highs recorded in the past five years.

In both countries, more recent statistics are preliminary and likely to be revised upwards.

Statistics Sweden told BuzzFeed News that the data it publishes has a lag of about two weeks, meaning it takes some 14 days for most deaths to be reported. National statistics offices in Britain and France work on a similar timescale.

The Danish statistics body told BuzzFeed News that it was right to say that the number of deaths during March and April 2020 is almost at the same level as the country’s 2015–2019 average. 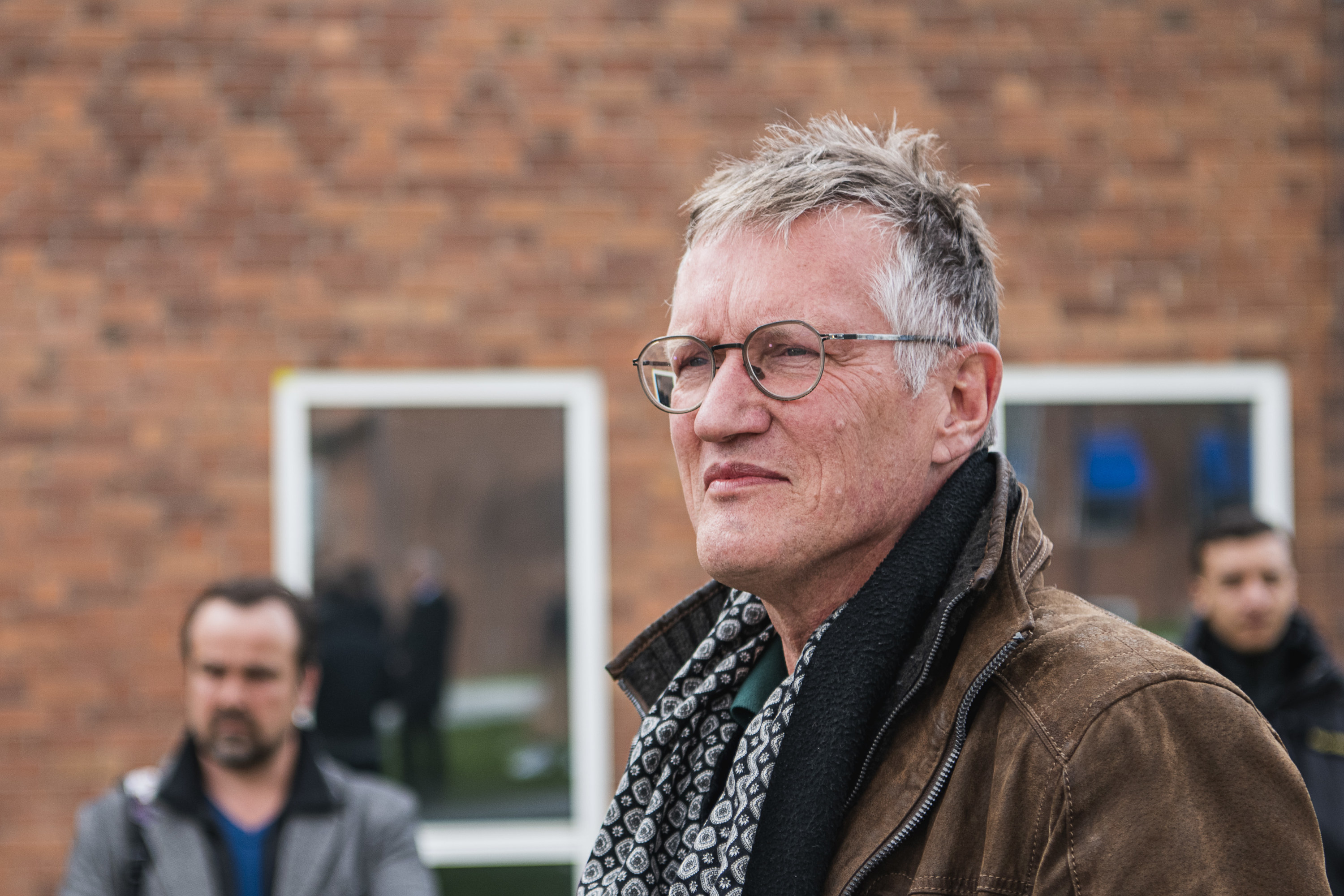 The Swedish government has said that deaths in nursing homes have contributed to the country being hit by a higher toll than its neighbours. Some reports have suggested that the virus has reached up to 75% of care homes in Stockholm.

State epidemiologist Tegnell told the BBC last week that nearly half of all deaths have occurred in care homes and the government should have acted sooner to shield the most vulnerable. But the death rate itself doesn’t automatically undermine the entire strategy, he said.

Tegnell has also said that Sweden’s modellers are starting to see immunity build up as the disease spreads through the population, one of the factors that many see as crucial before allowing restrictions to ease significantly. The WHO has warned, however, that there still isn’t enough evidence to say that those who defeat the virus are immune from getting it again.

Another of Sweden’s most senior epidemiologists, Professor Johan Giesecke, criticised other governments’ more stringent lockdowns, arguing in an interview with UnHerd that countries such as the UK overreacted to a report produced by the Imperial College London. The report had warned of hundreds of thousands of deaths without tougher restrictions, and its model is credited with having greatly influenced many governments’ response to the pandemic.

Responding to the criticism, Professor Neil Ferguson, one of the report’s authors, noted that per capita, Stockholm’s mortality rate is approaching that of New York. He told UnHerd that he expected those numbers to continue to rise day by day. “It is clearly a policy decision for the Swedish government whether they wish to tolerate that,” said Ferguson. “I don’t think it’s a decision other countries have made.”

Giesecke has predicted that death tolls will even out over time as governments lift restrictions, and as a result more people will become infected where lockdowns were strictest.

Health experts in the country also note that Sweden’s hospital capacity and health service have not been overwhelmed at any stage during the crisis, which is one of the main objectives that underpin the strategies of all countries, regardless of the rigidity of the specific measures each has put in place. In Stockholm this past week, more people left hospitals than entered.

It is too early to fully judge efforts to fight the pandemic, and a lot is still not known about the coronavirus itself. It will be a long time before the entire debate has played out, and even the best data is subject to revisions and reporting lags. But, for now, the data shows that Sweden’s different approach is coming with a heavier death toll.

Alberto Nardelli is Europe editor for BuzzFeed News and is based in London.