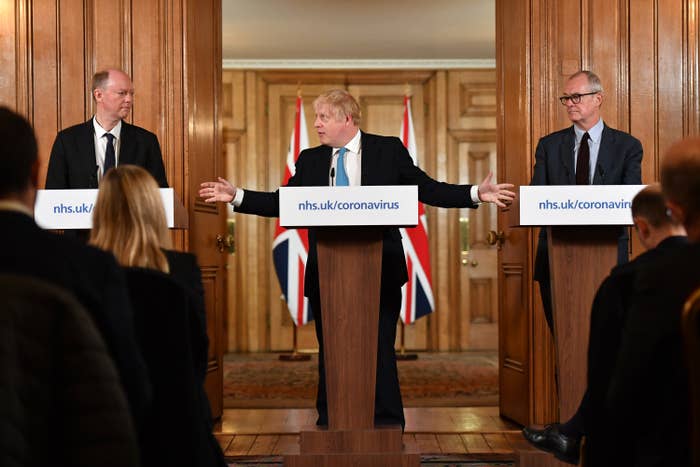 Some of the scientists advising the UK government on its handling of the coronavirus pandemic fear they will be used by ministers as “human shields” at a future public inquiry, and they have privately discussed how to protect themselves from any attempted blame game, BuzzFeed News can reveal.

Members of the Scientific Advisory Group for Emergencies (SAGE), and other experts who advise them, have become nervous about senior ministers, including first secretary Dominic Raab and chancellor Rishi Sunak, deflecting criticism this week by saying they had been “guided by the scientific and medical advice”.

Some SAGE advisers are worried that they and their chair, chief scientific adviser Patrick Vallance, as well as the chief medical officer, Chris Whitty, and his deputy, Jenny Harries, will be held responsible by Boris Johnson’s political team for the UK taking longer than other European countries to enforce social distancing in March, if this decision is found to have led to excess deaths in Britain.

Ministers’ claims to be “guided by the science” were also problematic — because in reality the science of this crisis had been “riddled with doubt, uncertainty, and debate”, according to Professor Robert Dingwall, a member of the New and Emerging Respiratory Virus Threats Advisory Group, which advises SAGE.

At Prime Minister’s Questions on Wednesday, Raab responded to accusations by Labour leader Keir Starmer that the government had been “slow” to act on lockdown, testing, and protective equipment by insisting: “We have been guided by the scientific advice, the chief scientific adviser, the chief medical officer, every step along the way.”

At Monday’s daily press conference, Sunak answered a similar question by saying ministers had taken “the right decisions at the right time, according to the scientific advice we received”.

Following a Sunday Times story lambasting Johnson’s handling of the crisis, a senior Whitehall source told BuzzFeed News that the prime minister and his political team had only acted in accordance with what they were being told by Whitty, Vallance, and SAGE, and that it would have been irresponsible for Number 10 to overrule them.

On the key task of ensuring NHS capacity was not breached, the advice from Whitty, Vallance, and SAGE was a success, they said, stressing that the experts retained the full support of the government and that the measures implemented by the UK had likely prevented tens of thousands of more deaths.

But it was right that genuine questions would be asked of the experts at a later date over areas where the UK may have fallen short, they said, such as the speed with which the government introduced social distancing, and the controversial advice from Harries that mass testing was “not appropriate” for Britain.

This emerging line of defence has concerned members of SAGE in recent days, with morale on the committee becoming “low” as government scientists began to suspect that ministers and Johnson’s aides were using them as “human shields” to insulate themselves from blame, a SAGE adviser told BuzzFeed News on the condition of anonymity.

Stressing the advisory nature of the group, they said that decisions were ultimately for ministers, a point repeated several times by Whitty at Wednesday evening’s Downing Street press conference.

Delegating decision-making to scientific experts was bad government because the ultimate decision on the UK’s overarching strategy — whether to introduce draconian lockdown measures or pursue a looser plan based on herd immunity — was inherently political, they argued.

Dingwall told BuzzFeed News that the public should be sceptical of any claim by ministers to have “followed the science”.

“The real world of science is riddled with doubt, uncertainty, and debate rather than a neat and compelling logic that points in a single direction,” Dingwall said.

He argued that the job of SAGE was to provide ministers with a set of options and a cost-benefit analysis, and then it was up for ministers to make decisions regarding which scientists and scientific arguments to endorse.

“The million-dollar question you have to answer is: Was the role of SAGE as a group of advisers respected or over-relied upon?” the first SAGE adviser said.

In response to the claim that experts were being used as human shields, a Number 10 source said the government would protect them from “unfair criticism”.

“Government scientists are playing a critical role in the fight against coronavirus. Protecting them from unfair criticism and worse is one of the reasons we have resisted pressure to name all the members of SAGE,” they said.

Alex Wickham is a senior reporter with BuzzFeed News and is based in London.

Katie Baker is an investigative reporter for BuzzFeed News and is based in London.