The biggest story about China and the coronavirus across Facebook, Twitter and Reddit last week, according to online engagement data from analytics site BuzzSumo, was a wonky report released by a small British right wing think tank.

The Henry Jackson Society report, released on April 5, argues China could be sued for USD $4 trillion in damages over its handling of the early stages of the COVID-19 outbreak. 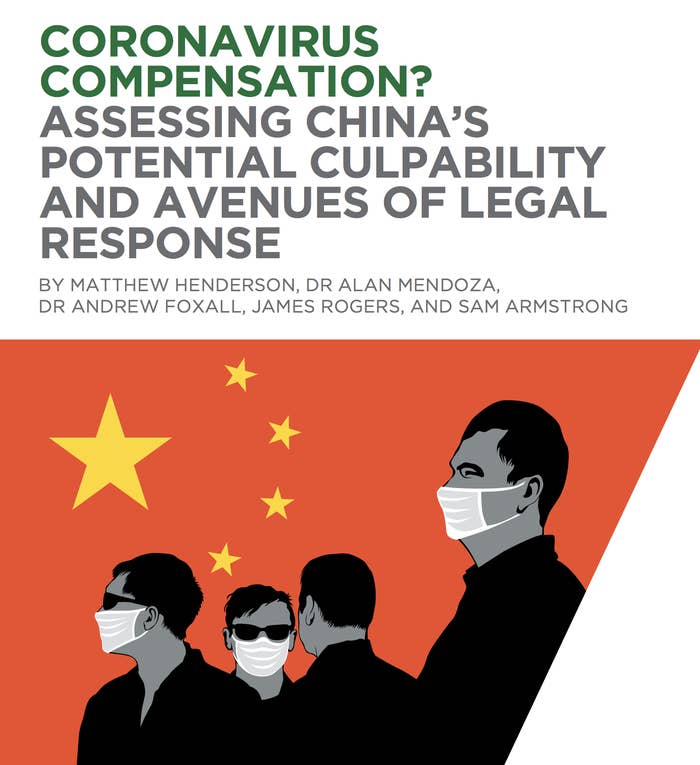 The report’s authors suggest 10 possible legal avenues for seeking compensation (ranging from filing in domestic courts to action in the International Court of Justice). The most circulated article about the report, published by Australian newspaper the Sydney Morning Herald, had more than 754,000 social media engagements.

It’s not often that a paper about alleged breaches of international law goes viral. But this report gave a shape and legitimacy to the growing calls to hold China financially accountable for the pandemic.

The idea that China should pay has taken several shapes — an international lawsuit, reparations, the waiving of debt — and spread from the fringes of the internet to some of Trump’s biggest supporters, as well as politicians and media around the world. (While he’s had no qualms blaming China for the coronavirus, Trump is yet to call for China to pay for COVID-19 damages.)

An early version of the idea has been circulating on the fringes of the internet for at least a month. Well-known conservative Twitter account @ComfortablySmug, previously revealed as belonging to Shashank Tripathi, tweeted on March 8: “China should pay for costs associated with Coronavirus testing, treatment and containment.” (He didn’t respond to interview requests.)

China should pay for costs associated with Coronavirus testing, treatment, and containment.

Two days later, a graphic demanding China pay COVID-19 “reparations” went viral. It was branded with the logo of small, UK-based organisation Stop Eating Dogs, which rallies against Asia’s dog meat trade, and was shared more than 9,600 times from the personal Facebook profile of Stop Eating Dogs founder Guy Wrench. The account did not respond to messages from BuzzFeed News. 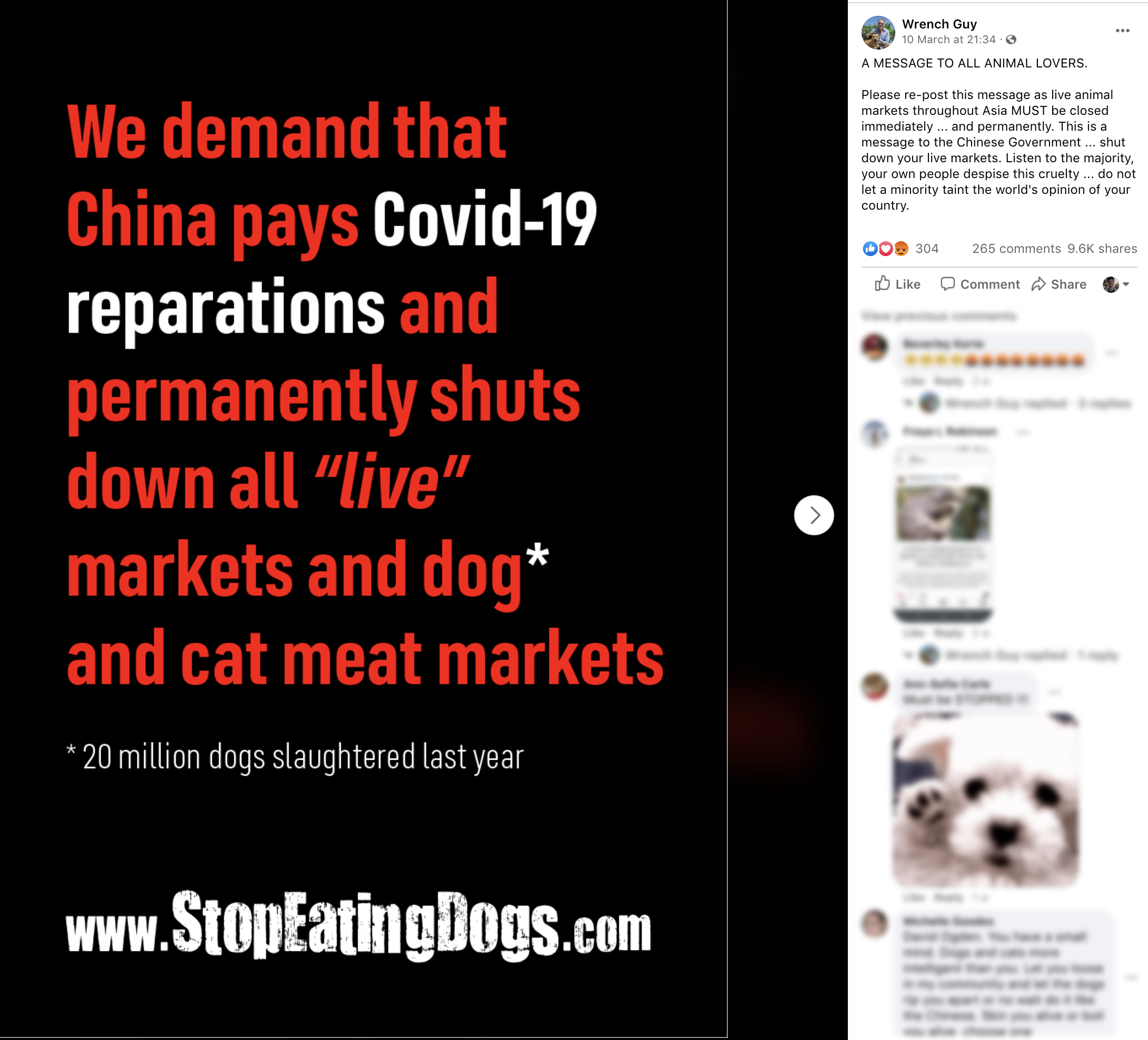 On March 13, US Republican senator Tom Cotton quote-tweeted a post from @ComfortablySmug asserting China will pay for the coronavirus, adding one word: “Correct.”

On March 16, Republican congressman Jim Banks appeared on Tucker Carlson’s Fox News show and called for Trump to force China to forgive US debt, or introduce tariffs to create a relief fund for American victims of the coronavirus. “When we talk about future trade deals, there’s an opportunity, an avenue, and I believe an appetite to go after China to make them pay further costs,” Banks said.

The interview propelled the idea into the mainstream and was covered in conservative publications like Breitbart and the Washington Examiner. The president’s son, Donald Trump Jr., shared a video of the interview on March 20 with his two million Facebook followers.

Other large American right wing personalities began to throw their support behind the idea of China paying up. A March 17 article on radio host Dan Bongino’s website covered a survey by conservative pollster Rasmussen Reports that found a plurality of voters supported China paying reparations. Conservative radio host Michael Savage spoke about it on a March 19 episode of his podcast The Savage Nation. Ben Shapiro shared a Daily Wire article quoting a US Naval College professor’s call for reparations due to violations of the WHO’s International Health Regulations on March 27. 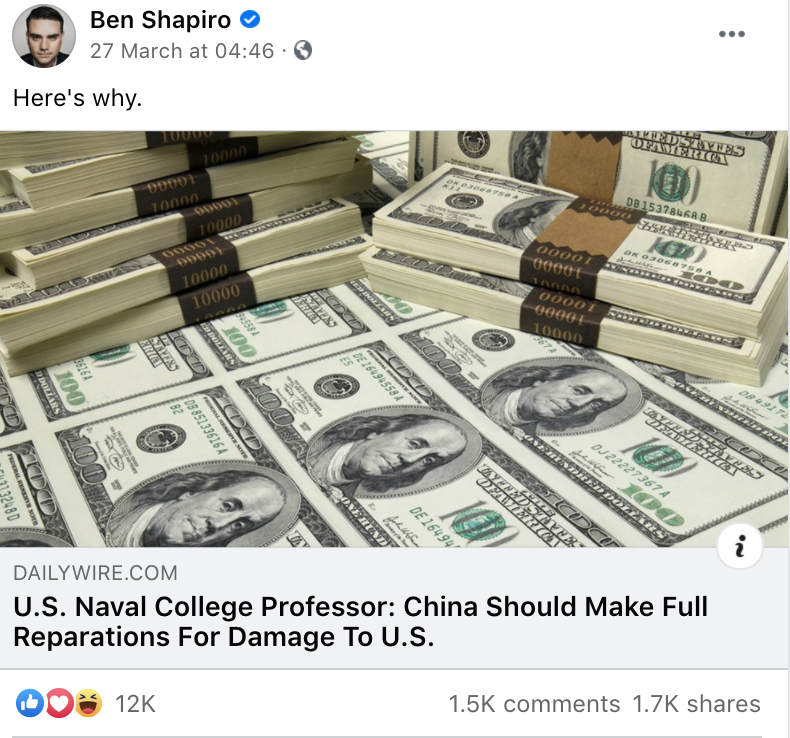 Secretary of state Mike Pompeo declined to answer whether the Trump administration was going ask China to pay damages, when asked at a March 25 press conference. “After we’ve managed to address this crisis, after we’ve managed to get these economies back on their feet,” Pompeo said to reporters, “there’ll be time for the world to evaluate responsibility for what took place.”

Right wing politicians and media from other countries affected by COVID-19 began to pick up on the idea. Australian politician George Christensen posted a widely-shared article from security blog WarOnTheRocks.com, adding “there may be a case for Australia and other nations to sue China for its negligence (or worse) that lead to the global Wuhan coronavirus pandemic”.

Italian journalist Francesca Marino’s article “Why We, Italians, Are Angry With China – And Want ‘War Damages'”, published in Indian online news outlet The Quint, has received nearly 400,000 social media engagements since it was published on March 27.

Recently, Trump’s closest allies have begun to circle around the idea of China waiving US debt as compensation. Senator Marsha Blackburn spoke about the need for China to waive America’s debt in a radio interview on April 2.

China owns over $1 trillion in US debt.

The US has been forced to spend over $2 trillion to combat the Chinese Coronavirus.

China needs to waive our debt.

Then senator Lindsey Graham appeared on Sean Hannity’s Fox News show on April 6 in support of the plan, which was soon echoed by Trump surrogate and evangelical pastor Mark Burns. 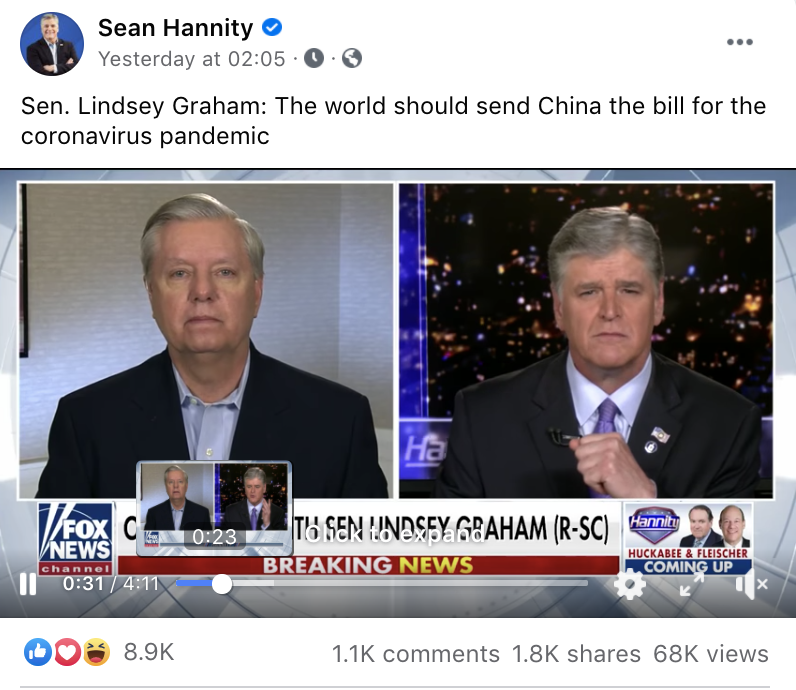 When Hannity — sometimes called the “shadow” chief of staff to the president — asked whether China should forgive loans, Graham responded enthusiastically. “Makes sense to me,” he said. “If it were up to me, the whole world would send China a bill for the pandemic.”

And how does China feel about the demand? The editor of the Chinese Communist Party-aligned publication Global Times, Hu Xijin, defiantly responded to the idea on Twitter.

“Too timid. How much money you can collect if you just play such petty tricks in the US? You should call for direct robbery in China where there is huge amount of wealth. Dare you? Do you have the strength? Coward!” he tweeted.

Too timid. How much money you can collect if you just play such petty tricks in the US? You should call for direct robbery in China where there is huge amount of wealth. Dare you? Do you have the strength? Coward!

Cameron Wilson is a reporter for BuzzFeed News and is based in Sydney.