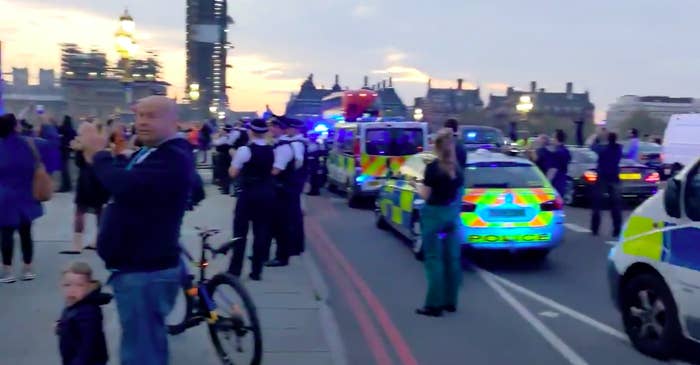 Metropolitan Police officers have been criticised for failing to observe or enforce social distancing measures as a crowd of people gathered on London’s Westminster Bridge during the weekly “Clap for Carers” on Thursday evening.

Several UK police forces have been criticised for taking a heavy-handed approach to enforcing social distancing, for example by moving on people who were sunbathing alone or having picnics 2 metres away from others, and by suggesting they may search supermarket trolleys to ensure that shoppers were only buying essential items.

But a video posted to Twitter on Thursday night showed police officers and members of the public standing close together while showing their support for NHS and care staff as part of the weekly national round of applause.

The footage also shows two paramedics on the scene, although they were standing away from the majority of the crowd.

The footage was shared on twitter by Damir Rafi, a doctor at St Thomas’ Hospital, which stands at the foot of the bridge across the Thames from Parliament.

The scene from Westminster bridge #ClapForCarers

“I’m a doctor working at the hospital that’s right there,” he said. “And yes, I was also somewhat perplexed by the lack of social distancing.”

Responding to Rafi’s tweet, one nurse described the incident as “really infuriating” and said it made her “sick”.

“It’s more appreciated if social distancing was practise[d] here than the clapping itself,” she tweeted.

@d_rafi1 This is just really infuriating!!!!
I’m a Nurse &amp; this scene made me sick!!! It’s more appreciated if social distancing was practise here than the clapping itself!
Do we really CARE???
Expect for more weeks of torture, more casualties because of this!!!
#TotalLockdown

On Twitter, barrister Matthew Scott questioned why the police had not taken action to impose social distancing with the people on Westminster Bridge, describing it as “worse than sitting on a park bench, worse even than sunbathing”.

This is worse than sitting on a park bench. Worse even than sunbathing. Why aren't the police arresting these people? https://t.co/f2oyLdmHBs

When asked about the footage on LBC radio on Friday morning, London mayor Sadiq Khan said he suspected police and the ambulance service will be asking “questions in relation to this”.

“Clearly the advice does not appear to have been followed,” he told host James O’Brien. “A number of people were not 2 metres apart, and these rules are there for all of our wellbeing and health, and we have to be cognisant of the facts that when this goes into social media people can get the wrong impression but also risk personal health so I am sure there will be questions.”

He added: “I suspect and I have no confirmation that the Met and London Ambulance Service will be asking these kind of questions in relation to this. The police have a difficult job to make sure the rules are observed and I think they will both be asking questions.”

But in a statement, Scotland Yard said only that it would remind officers about the importance of social distancing.

A Met spokesperson said: “Officers, along with other emergency service workers, came together last night on Westminster Bridge to celebrate the work of all key workers.

“A large number of members of the public also gathered to express their gratitude. While many people adhered to social distancing guidance, it appears that some did not.

“We regularly remind our officers of the importance of social distancing where practical, and will continue do so.”

BuzzFeed News approached the Home Office for comment on the way the officers on the bridge had handled the incident, but a government spokesperson did not address that question.

In a statement, they said: “The government asks that everyone takes responsibility and adheres to social distancing rules so that we can safely show our appreciation for those who are working so hard to fight coronavirus.”

Police have been given new powers by Parliament to enforce social distancing measures introduced during lockdown, as the government aims to prevent the spread of the novel coronavirus. More than 3,200 fines have been handed out by officers to people found to be breaching the rules.

Last week, the chief constable of Northamptonshire, Nick Adderley, was forced to backtrack after suggesting his officers would be searching supermarket trollies and baskets to make sure people weren’t buying nonessential items.

Home secretary Priti Patel said his comments were “not appropriate”.

The National Police Chiefs Council issued new guidelines this week to officers on what is and what isn’t allowed. These state, for example, that stopping to rest while doing exercise is fine, but prolonged sitting on a park bench after short exercise is not.