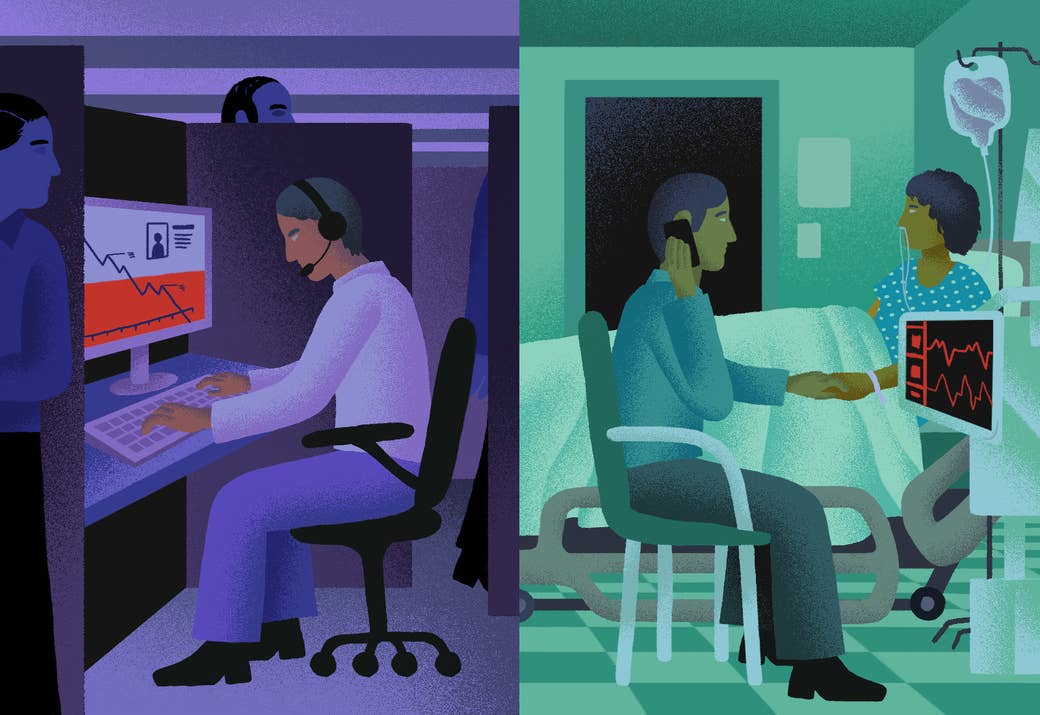 Among all the consumer protections that lawmakers have extended to Americans during the pandemic, relief from debt collection was not one of them. While emergency laws allowed people to put certain forms of debt like student loans and mortgages in forbearance, people whose debt took other forms — like credit card, auto, and payday loans — had no legal protections. Debt collection quietly hummed along as the pandemic caused mass death, disease, and unemployment.

Not only did collection companies still operate over the last year, they also offshored work to lower-cost labor markets as the jobless rate in the US soared. BuzzFeed News spoke to a person who worked in the Tijuana, Mexico, office of an American third-party collections company. He asked to be identified with a pseudonym to protect his identity. “Rick,” who is 20 years old and a Mexican citizen, said that for 10 hours a day, he logged into an automated call system that churned agents like him through hundreds of calls, back to back. He remembered trying to extract money from people who simply didn’t have it, and even one person who was being treated in the hospital for the coronavirus. “It feels bad because I also have my debts,” he said. Earlier this year, he quit.

Here’s Rick’s story, which has been edited for clarity and length.

I was unemployed in 2020 because I recently moved here to Tijuana. I saw a job ad on Facebook, and I had some friends who were working there who said it was recruiting for customer service and collections. The ad made it seem like this was a customer service job because you needed to have customer service experience. It wasn’t until I started training that they said that we were going to be collecting from people who were calling in and trying to make payments. And when we had more experience, we’d be making calls out to customers. I didn’t know.

I was a little bit thrown off by that because they weren’t really up front with it. I was working for call centers before, but for customer service, not collections. So it was kind of scary for me. But I needed the job. So I tried my best. We had just two weeks to learn everything in training. Since English is not the first language for some of us (my first language is Spanish), we needed to learn new words like “deferment” and “balloon payment” and what a borrower and creditor are. So it was interesting and challenging at the same time.

I’d go in at 6 a.m. and work for 10 hours a day to 4 p.m. Because of COVID, we sat two seats apart from one another. We always had to have our face masks on. There were about 90 agents on the team.

We have a system that is always dialing by itself throughout the whole day. The account number automatically pops onto the screen, and we would get access to the account. But dialing takes no more than 30 seconds, so we’d have one minute or less to see their information and how much they owed. We’d just have to go in and start the call without knowing much about the history of the account. Sometimes the system just connected us and people would already be saying, “Hello? Hello?” I didn’t feel ready to take care of something so important with so little time to prepare. That’s definitely something they should improve because people are going through bad times.

Typically, the system would dial more than 200 calls a day, back to back. Most of them didn’t answer. I’d talk to around 50 people a day. All the customers were based in the US. It was mostly personal loans and auto loans. If I needed to go to the restroom or if I needed a break, I could put myself in a function to stop receiving calls, even though the supervisors didn’t quite like that.

We don’t really have control over how many times we’re actually calling a customer. We don’t have a system to know. Sometimes a person would get 10 calls, and they were aggravated by that. Sometimes we’d get reconnected to the same person in one day, and we had to pretend we didn’t know or apologize to them.

Once my colleague called a person, and she was really mad. She said she had received at least 20 calls that day, and that she was not going to pay, that she was over with it. She was actually at the hospital. She said she had actually lost her husband to COVID, and now she was in the hospital with COVID getting oxygen and in very bad condition. But really, someone else would probably try to get in contact with her two hours later, and the day after that, because, once again, there’s really not much we could do about the calls.

There are some metrics we needed to meet. But it was not about how much money we collected. A quality assurance agent scored us on our “customer service.” They were trained to evaluate our calls. We had our scripts, and there were some scripts we needed to say word for word, verbatim. So they evaluated the customer service we provided mostly according to that; if you missed just one word, for example, then you would get a zero. I was doing OK.

In our scripts, first you go through the verification process. When it was time to collect, the consumer would explain the situation, like due to COVID or due to not working, they weren’t able to pay. We’d have to try at least two times to get a payment. We could offer some deferment, for example, or maybe a payment plan. On a normal day, more than half of the people I talked to couldn’t pay anything. Zero dollars.

It feels bad because I also have my debts. I also have things to pay for. So trying to get them to pay was not easy for me. Even without the pandemic, it’s hard to ask for money. But it’s more of a challenge when you know that everyone’s going through something that has affected a lot of people. I felt a little guilty asking people for money — but at the same time, we had to just keep on going with our job. We didn’t get involved trying to help out [the consumer]; we were just there to collect, and that’s something that our supervisors reminded us throughout the whole experience.

My pay was around 3,000 Mexican pesos [$150] per week. We’re really close to San Diego, so we tend to have a higher cost of rent here. So, I mean, I am able to survive with that. It’s nothing compared to someone who went to college. But, honestly, I know that since it is an American company, they could be paying more.

The job was mostly people being mad at you because you’re bothering them and trying to collect. Because of my experience working in call centers since I was 17, I was kind of used to people yelling at me. But it’s hard at the end of the day; it is hard for someone to be yelling at you and telling you mean things. I quit the debt collector job in February. I would like to do something else. I think the reason why I am still working for a call center now is because I’m used to it. And it actually pays better than other jobs since they’re American companies. ●