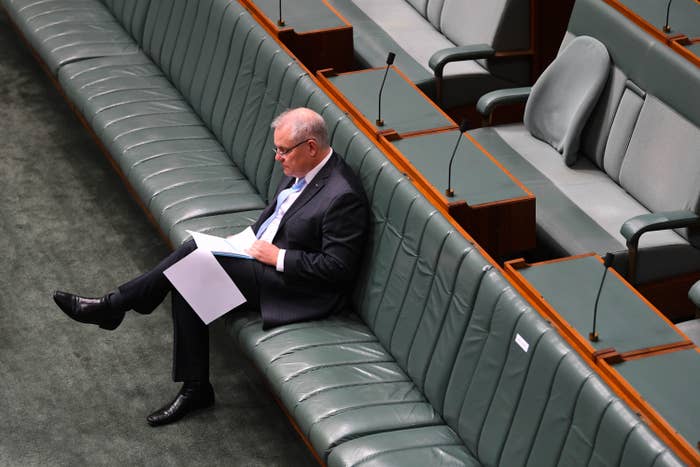 Prime minister Scott Morrison in the House of Representatives on April 8, 2020.

The coronavirus pandemic has Australians joking that prime minister Scott Morrison is an unlikely new comrade in the march toward socialism. In a matter of weeks, the once surplus obsessed “ScoMo” has doubled the rate of welfare payments, scrapped childcare fees for essential workers, announced a nationwide moratorium on rental evictions and handed $150 million extra dollars to domestic violence services.

People tweeted in jest, welcoming “Comrade Morrison”, a “socialist leader”, to the resistance, while political pundits say Morrison is an “accidental socialist” or a temporary “whatever-it-takes Keynesian”. But the editor-at-large of the nation’s conservative broadsheet reminded readers the prime minister is “not a radical” who will be manipulated by “revolutionaries”.

“He’s definitely not a socialist,” says Ariadne Vromen, a professor of political sociology at the University of Sydney. Rather, she thinks, the government is realising the role it plays in protecting people from the inequalities of the market.

“We are being forced to think about that, the role of the state, I guess that is what this moment is doing,” Vromen told BuzzFeed News. “[The response from the government] is social democracy.”

Emeritus professor Frank Stilwell from Sydney University’s political economy department said Morrison and his cabinet are implementing policy so unaligned with their own ideological beliefs that he thinks some MPs would be regretting even winning the election.

“These guys must hate every minute of having to do this,” he told BuzzFeed News. “Tenant rights, free childcare, doubling Newstart — this is more than Keynesian economic stimulus, it really is a major change in social policy.

“It must go against every instinct of Morrison and the Liberal cabinet but the circumstances absolutely require it.”

Associate professor Tim Lynch from the University of Melbourne’s school of social and political sciences said Morrison, Donald Trump in the United States and Boris Johnson in the United Kingdom weren’t currently trying to transform a capitalist system — they were trying to salvage it.

“You’ve got conservative leaders who are in many important respects indulging in big government left-wing Labor-style behaviours at a surface level,” he told BuzzFeed News. “Ideology is taking a backseat to the emergency… [Leaders are thinking] ‘how do we protect what we’ve got?’ Not ‘how do I have some Damascene conversion to a new political ideology?’”

“Morrison, Trump and Johnson are doing the same,” he said.

Morrison has been clear the multi-billion dollar spending spree is temporary, repeatedly reminding Australians about what he calls “the snapback” — the moment when the crisis ends and the new spending is cut.

The question for those who have fought inequality for decades is not whether Morrison is suddenly a socialist — he’s not — but how these seismic shifts in funding, policy and rhetoric produced by the crisis can be sustained when life returns to “normal”. 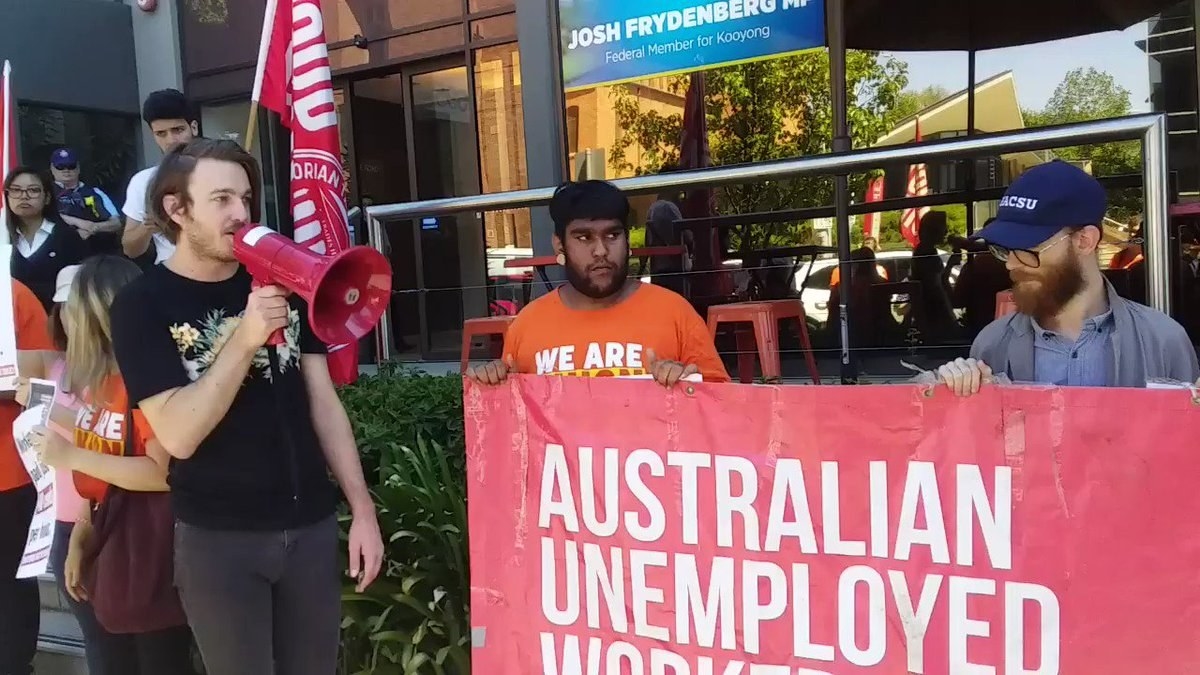 Jeremy Poxon broke down in tears when the government announced it would double the rate of welfare payments for six months as part of an economic stimulus package.

Poxon has campaigned to increase the single rate of Newstart, Australia’s unemployment payment, which hasn’t increased in real terms since 1994, by at least $95 a week.

When the pandemic hit, Poxon said he thought the government might raise the rate by $50, and described the $275 per week increase as “mind blowing”. 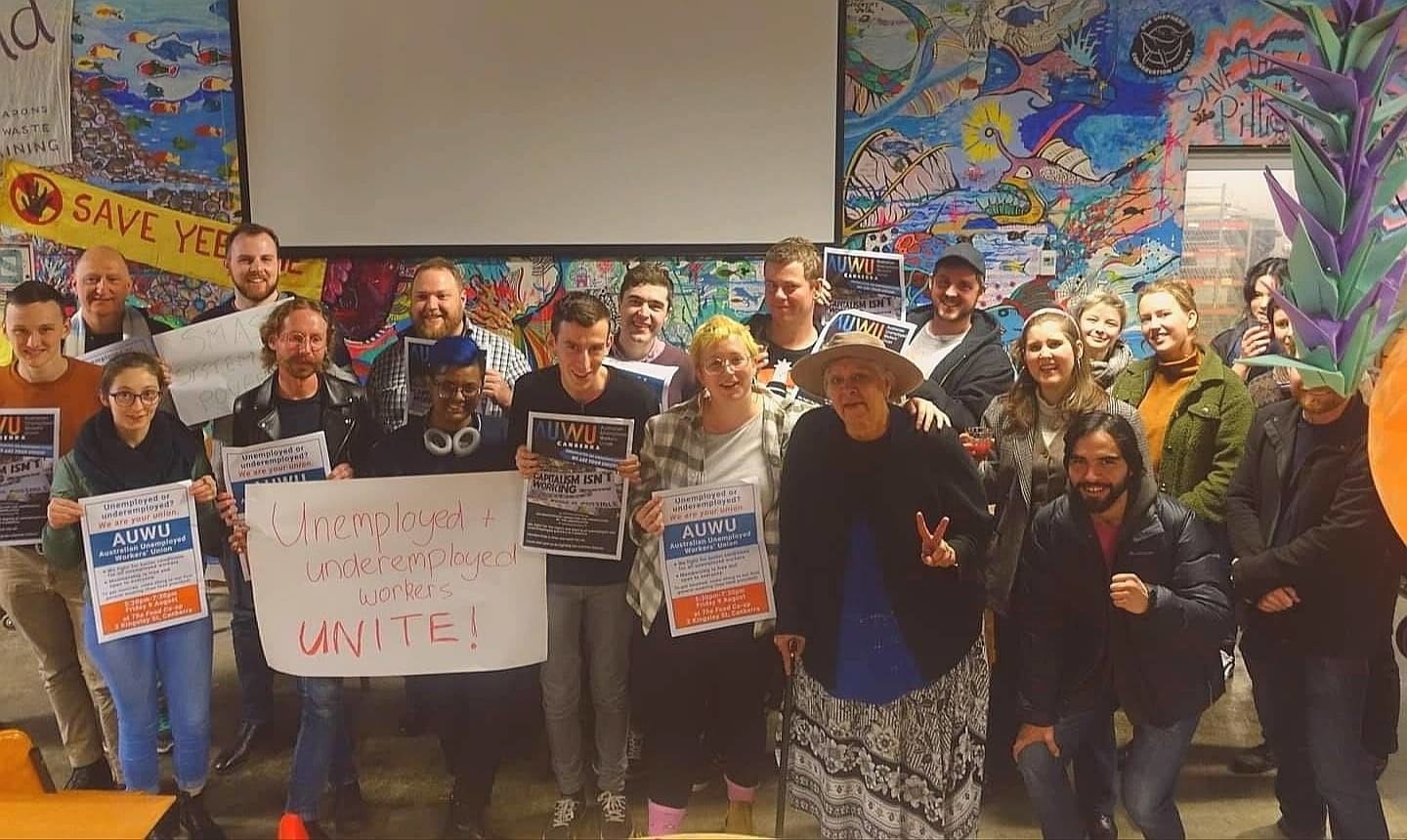 “We didn’t expect a Liberal government to outflank Labor, the Greens and the left,” he said. “They managed to immediately lift like 800,000 people out of poverty. Over the next six months people who have been skipping meals every day will be able to afford three square meals.”

Nations around the world have introduced welfare-as-stimulus measures. In the US, Trump has signed off — literally — on a $2.2 trillion coronavirus stimulus package through which adults making less than USD$75,000 a year can access an emergency universal income payment of $1,200, plus $500 per child. Those who earn more than $75,000 will receive a smaller payment and the checks are capped for anyone who earns over $99,000.

The UK is expanding welfare payments in a multi-billion dollar package, covering 80% of wages for workers whose jobs are at risk and offering renters a billion pounds in support. Johnson has lifted the UK’s Universal Credit, a consolidated monthly social security payment, by about £80 a month for a year in response to the pandemic.

Poxon’s jubilation is tempered by the fact the huge raise only happened because hundreds of thousands more Australians are applying, or will need to apply, for welfare. Lines to Centrelink, the welfare agency, stretched around the block last month in scenes that were likened to the Great Depression.

Poxon said AUWU members are saying things like “Oh, well now that this unemployment crisis is affecting the middle class it’s a real crisis now” and “Oh goodness gracious me, a rich person is having to access entitlements” — as if their suffering is only now seen as “legitimate”.

“We have been fighting for you all along,” he said.

Poxon knows the government is determined to repeal these changes once the pandemic is over but thinks it will be “incredibly difficult” as many people won’t be “merrily waltzing back into secure employment”. 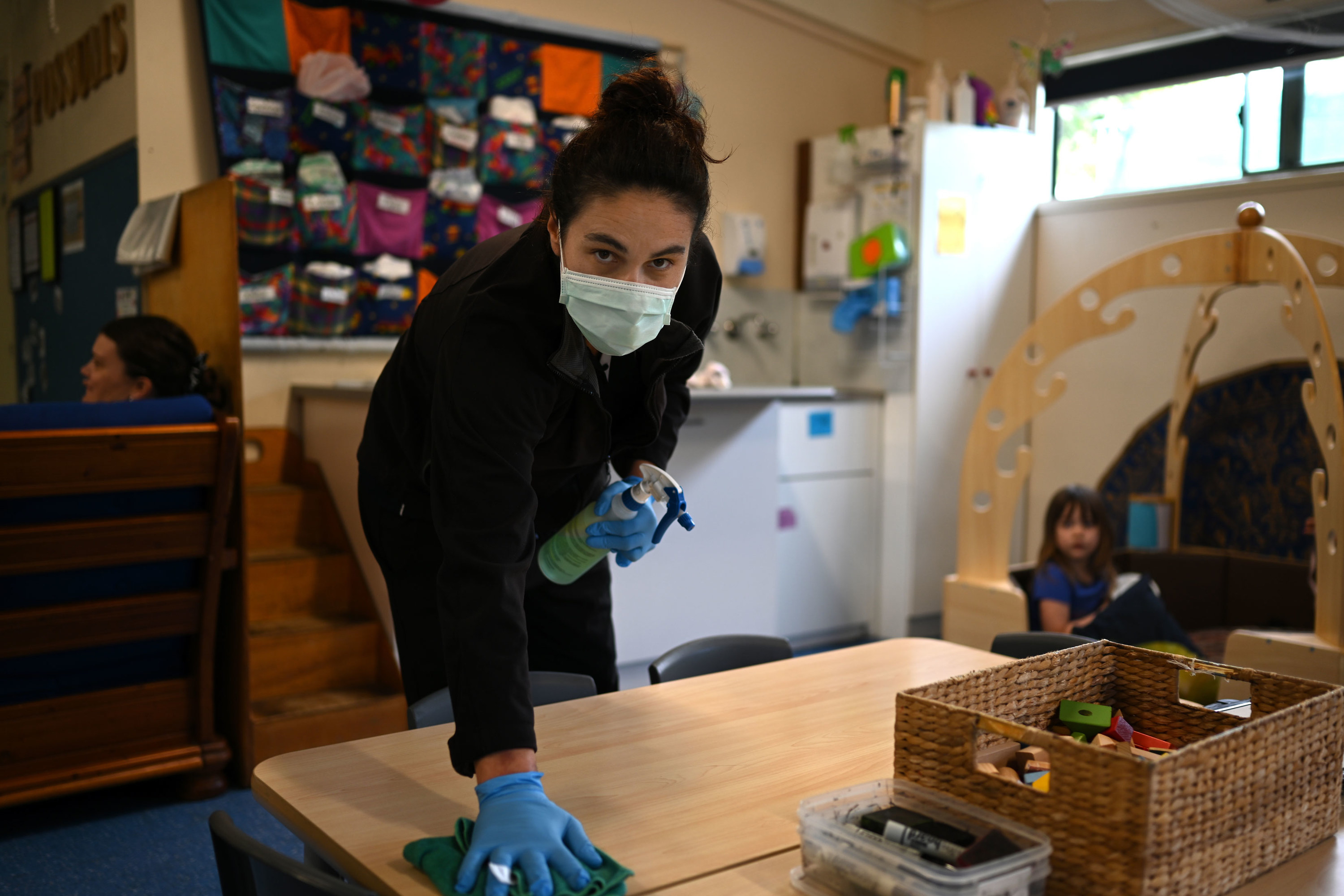 Earlier this month Morrison announced childcare would be free for parents still using it during the pandemic, describing it as “critical” and saying essential workers must have access to childcare.

Marie Coleman first became involved in Australia’s childcare policy in the 1960s, and in 1976 was appointed the Director of the Office of Childcare under the Fraser Coalition government. She has been campaigning for affordable childcare for decades. 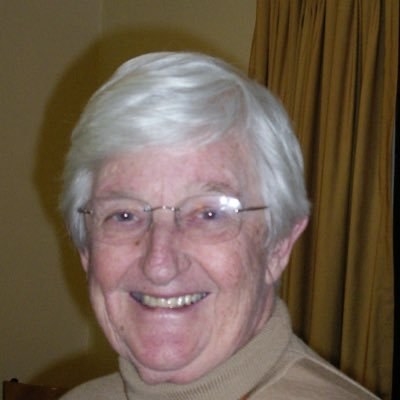 “This is the first time I can recall a prime minister of any complexion actually describing childcare as an essential service and that in itself is interesting,” the 87-year-old told BuzzFeed News. “The moment you say in all seriousness that it is an essential service then you begin to think about this model we have, which is predicated on immense profit taking corporations, and in which we can’t really control what is being charged to parents.”

Throwing money at the system would not change the structure, she said, suggesting Australia’s newly “quasi-socialist” government should take this opportunity to rethink how the sector works.

“The structure of childcare at the moment means that developing an organised, unionised workforce is not tremendously easy,” she said. “The inefficiency of the system and its burgeoning costs and public dissatisfaction is still going to be there.”

Late last month Morrison announced a six-month “eviction ban” for those unable to make rent due to financial distress. He then said the ban was for states and territories to enforce. Fewer than half have so far passed the necessary legislation to make it law but the NSW government followed through last week and allocated $220 million to residential renters and landlords. Renters who have lost a quarter of their household’s income due to the new coronavirus will be protected from eviction for half a year if they have “negotiated in good faith” with their landlord.

In the US there are pandemic-induced moratoriums on evictions in more than 30 states and in the UK the government announced a three-month ban on evictions. 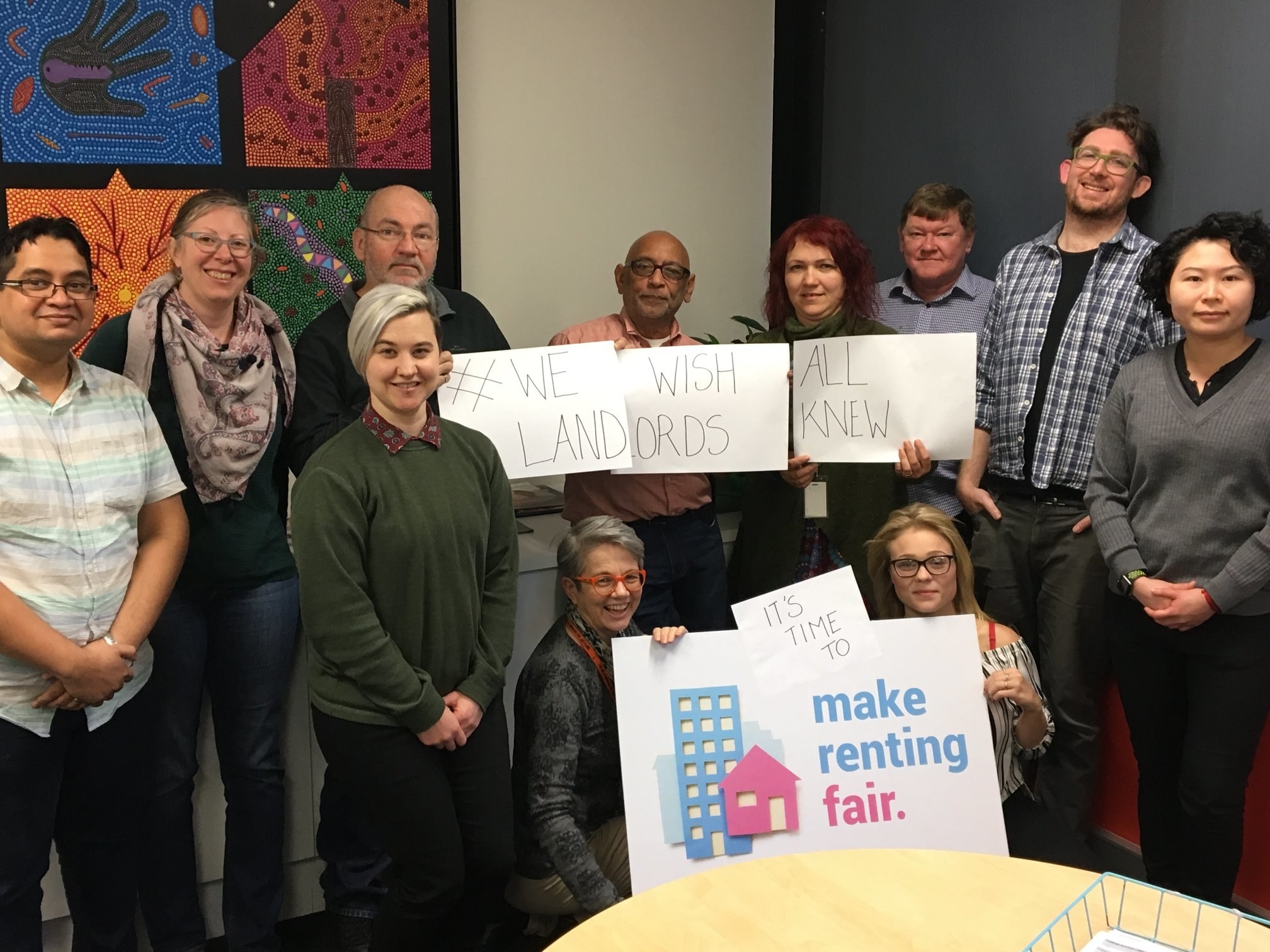 The NSW Tenants’ Union chief executive Leo Patterson Ross said while many European countries have annual moratoriums on evictions, especially over winter, the announcement was a “fundamental shift” in tenancy rights in Australia.

“It is hard to express how hard [that change] was going to be without the pandemic,” Patterson Ross told BuzzFeed News. “If you talk about this kind of thing ordinarily you would just get landlords saying ‘this is my property and I need to be able to recover it’.

“[Europe’s] human rights framework is much more developed and their relationship to housing as an essential need is much further on.”

In the past few months Australian landlords have suggested those facing pay cuts should still cover rent, told those on visas to vacate properties immediately and threatened victions for those who can’t pay rent. One landlord responded to a tenant who asked to negotiate a rent freeze by asking how much they spent on food and entertainment.

“You can be a landlord and have zero knowledge of what that means and your obligations and responsibilities,” Patterson Ross said.

“I think it is weird that we don’t have registration and education for landlords, or make sure they have some cash reserve to be able to fulfil their obligations.”

Patterson Ross said the pandemic is likely to put renters’ rights on the table in upcoming state and federal elections.

According to Vromen, the policies might change, but the lasting legacy of the coronavirus pandemic will be the inequality it has laid bare in Australia. Who does and doesn’t get to work from home is one part of that.

Stilwell said not everyone will be in favour of turning Australia into “one of those Nordic states with a higher level of taxation”, but that this period will show voters the need and benefit of a more robust social security net. In the meantime, Stilwell says the government abandons austerity and spends more than it did in response to the Global Financial Crisis.

“Hopefully we will now see the end of this always stupid rhetoric about the need for a surplus budget,” he said. “Governments are not like households — they can manage higher social priorities by using economic instruments like deficit budgeting.”

Lynch said people were letting their political views colour how they saw the actions of conservative governments, seeing them as “validation” of their own ideologies.

“If you’re a conservative, the response is about saving capitalism and if you’re on the left the extension of government power is validation that the government should be acting in defence of claims of equality and justice,” he said. “These actions aren’t being undertaken because of a newfound love of the poor… they are being done because [equality and justice] are rendered [further] beyond reach in an economy which is broken, [as opposed to] one which is capable of being salvaged.”

So will Morrison be able to “snap back” the reforms when this crisis is over?

“They will try but I don’t think they can,” said Stilwell. “This is a classic example of when material conditions triumph over ideology.”

Lynch vehemently disagreed. He thinks if there is no snapback, the public will ask: “Why are you continuing to take taxation from us for reasons which have now passed?”

Gina Rushton is a reporter for BuzzFeed News and is based in Sydney.