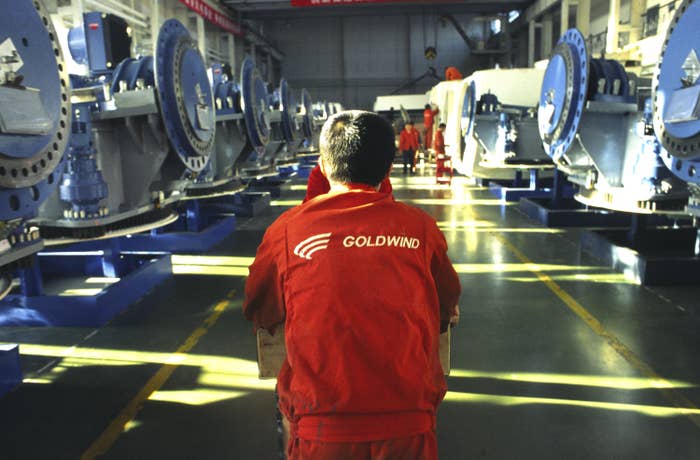 A worker at the Goldwind Manufacturing plant in Urumqi, China.

Apple and Warren Buffett’s Berkshire Hathaway have done business with a Chinese wind energy giant linked to controversial government and labor programs in Xinjiang, where the US and other countries say China is carrying out a genocide of Muslim minorities.

Xinjiang Goldwind Science & Technology, China’s largest wind turbine maker, on at least one occasion entered talks to receive “labor exports” from the Hotan prefecture in Xinjiang to a facility hundreds of miles away, new research from the Tech Transparency Project has found. Hotan officials traveled to a Goldwind plant to “coordinate” the labor exports, as part of an effort to strengthen the “organizational and disciplinary education” of workers, according to an archived local government media report uncovered by the Tech Transparency Project.

“Labor transfer” programs are closely associated with forced work for Muslim minorities in Xinjiang. “Forced labor has now become an integral part of the government’s efforts to ‘reeducate’ Muslim minorities,” the Center for Strategic and International Studies in Washington wrote in 2019, as part of its extensive research on the issue.

Goldwind, one of the world’s largest wind turbine makers, has strong ties to the ruling Communist Party typical of many successful Chinese companies. But its connections to Xinjiang are unusual. The company’s CEO has made explicit statements in support of a government program that has placed Communist Party cadres in the homes of Muslim families in Xinjiang. In December, Goldwind signed a deal with the Xinjiang Production and Construction Corps, a paramilitary group that the US placed sanctions on last year for its connection to human rights abuses in the region.

It’s unclear whether the 2016 “labor export” discussions ever came to fruition, but the plans raise “troubling questions about whether the wind turbine company has taken part in the exploitation of Uyghurs in its home base of Xinjiang,” the Tech Transparency Project said in its report, released today.

In response to questions for this article, Goldwind said that “the information and allegations from the Tech Transparency Project are categorically false and have no basis in fact,” adding that Goldwind has never engaged in the forced export of labor from any region of China and does not use forced labor of any kind.

Goldwind also said the wind turbines it supplies in North America and other regions are made and assembled on China’s east coast, and not in Xinjiang. 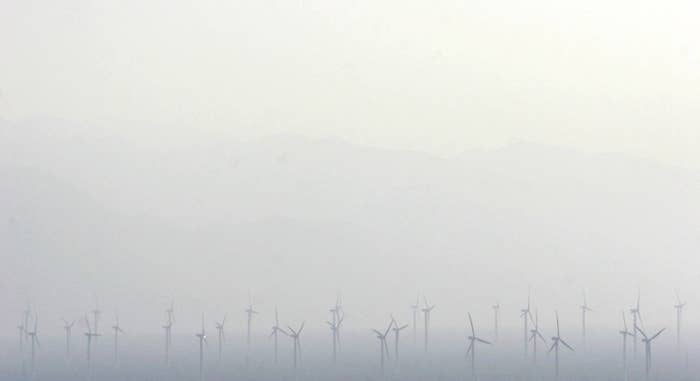 Wind turbines are seen through the haze at a wind power plant on September 18, 2006, near Dabancheng, in the Xinjiang Uygur Autonomous Region, China.

The Chinese government is carrying out a campaign of surveillance, imprisonment, and forced labor targeting Xinjiang’s millions of Muslim minorities including Uyghurs, Kazaks, and others. The program has elicited strong censure from UN officials and governments including the United States, the EU, and Canada.

In 2016, Apple invested in four wind power projects with Beijing Tianrun New Energy Investment, a subsidiary of Goldwind that runs wind farms in China. Tianrun gave Apple a 30% stake in each project. None of the wind projects are located in Xinjiang. Apple said the projects were all completed in 2017, and that Goldwind has not supplied them since then.

The investment was part of Apple’s “commitment to reducing the carbon emissions from its manufacturing,” Lisa Jackson, vice president of environment, policy, and social initiatives at Apple, told state newspaper the China Daily at the time, adding that it would enable Apple to send clean energy to its suppliers in China.

“Looking for the presence of forced labor is part of every assessment we conduct in every country where we do business,” Apple said in response to questions about this article. “We monitor this closely and over the past year, despite the restrictions of COVID-19, we undertook further investigations and found no evidence of forced labor anywhere in our supply chain.”

In October 2018, Berkshire Hathaway Energy provided financing to Goldwind’s Chicago-based subsidiary to develop a $250 million wind farm in McCulloch County, Texas, called the Rattlesnake Wind Project. Goldwind sold the project, which it had described as its largest in the US, in November 2020.

Berkshire Hathaway did not respond to requests for comment by the time of publication.

Goldwind commands 21% of the country’s wind energy market, according to data from BloombergNEF. It has state-owned shareholders, including the state-owned power company China Three Gorges Corporation. The company’s 2020 net earnings grew nearly 35% to $452.4 million compared to a year earlier.

The US government has banned tomato and cotton imports from Xinjiang, saying the two industries are entangled with forced labor. But Xinjiang’s biggest export to the US in 2020 was actually wind turbines, the South China Morning Post reported in December, citing Chinese government trade data.

“The US is a hot market for wind power, so all suppliers are trying to sell there,” said Xizhou Zhou, who leads the market research company IHS Markit’s global power and renewables practice.

Wu Gang, Goldwind’s founder and chair, visits southern Xinjiang — a part of the region where Uyghurs form a larger part of the population — at least six times per year for “poverty alleviation work” that involves living and eating with families in villages because of government requirements, according to a 2018 post published by Goldwind’s company account on the Chinese social media platform WeChat and uncovered by the Tech Transparency Project. The trips are part of a controversial government program known in Chinese as fanghuiju, an acronym for the slogan “Visit the People, Benefit the People, and Bring Together the Hearts of the People.”

Wu’s participation in the program is described as part of Goldwind’s work to become a good “corporate citizen.” During these trips, Wu played soccer with local kids and set up “cultural stations,” the article said.

But the fanghuiju program facilitates state surveillance, according to a 2018 investigation by Human Rights Watch. During these visits, which can last several days, “families are required to provide officials with information about their lives and political views, and are subjected to political indoctrination,” Human Rights Watch found. The group called on the government to immediately end the program, adding that there’s no evidence that families have any power to refuse these visits. The fanghuiju program also enables the government to gather data about ethnic minorities that helps determine who is detained, Human Rights Watch found.

Wu is a former member of China’s rubber-stamp parliament, the National People’s Congress, and still sits on the Chinese People’s Political Consultative Conference, a legislative body whose function is largely ceremonial.

Goldwind signed its deal with a division of the Xinjiang Production and Construction Corps in December — four months after the US placed sanctions on the organization — to provide power to a small city called Beitun.

Goldwind’s large presence in the market has earned it a number of Western business partners. The Las Lomas wind project in southern Texas, consisting of 48 wind turbines spread out over 36,000 acres near the Mexican border, is operated by French energy company Engie and sells power to Microsoft. A South China Morning Post investigation of shipping records and other official data showed that Las Lomas sourced wind turbines from Xinjiang Goldwind. Wu has said Engie is a major client of the company’s subsidiary Goldwind International.

“With regard to the situation of the Uyghurs in China, Engie has decided to carry out specific checks on its concerned suppliers,” the company said in response to questions from BuzzFeed News. The company is committed to ensuring forced labor is not used in its supply chain, it added.

Scrutiny of Apple’s work in China has been growing in recent months. The Information reported in May that it and two human rights groups had discovered seven Apple suppliers linked to programs associated with forced labor. At least five of them “received thousands of Uyghur and other minority workers at specific factory sites or subsidiaries that did work for Apple,” the publication reported, adding that one Apple supplier ran a factory next to a suspected detention center in Xinjiang.

“We urge Apple CEO Tim Cook to divest from Chinese suppliers in Xinjiang who are implicated in forced labor,” US Sen. Jeff Merkley and Rep. James P. McGovern, who cochair the Congressional-Executive Commission on China, told BuzzFeed News in a statement. “We also ask Apple to engage with U.S. Customs and Border Protection on their China supply chains to ensure that no Apple import is made with forced labor. There must be a concerted, tough, and global response to the atrocities being committed in Xinjiang.”