This is Capt Tom Moore, a 99-year-old war veteran from Bedfordshire in south-east England. 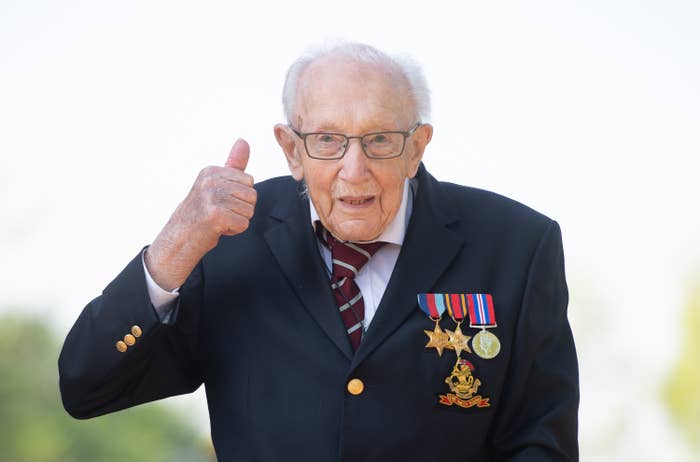 He set himself the challenge of walking 100 laps of his garden before his 100th birthday at the end of the month. He wanted to raise money for NHS staff who are caring for patients being treated for COVID-19.

His daughter Hannah said he wanted to take up the challenge to thank the NHS for the “incredible care” he had received over the past 18 months.

Moore has been walking 10 laps of his garden every day.

He was born and brought up in Keighley, West Yorkshire, and enlisted in the Duke of Wellington’s Regiment at the beginning of the Second World War, where was selected for officer training. He went on to serve in India and Burma.

He now lives in Marston Moretaine, Bedfordshire, where he has, with the aid of a walking frame, been walking 10 laps of his garden — which is 25 metres long — every single day.

“I can get about slowly,” he told the BBC. “So long as people don’t want me to run about too fast I can manage and will continue to manage as long as I possibly can.” 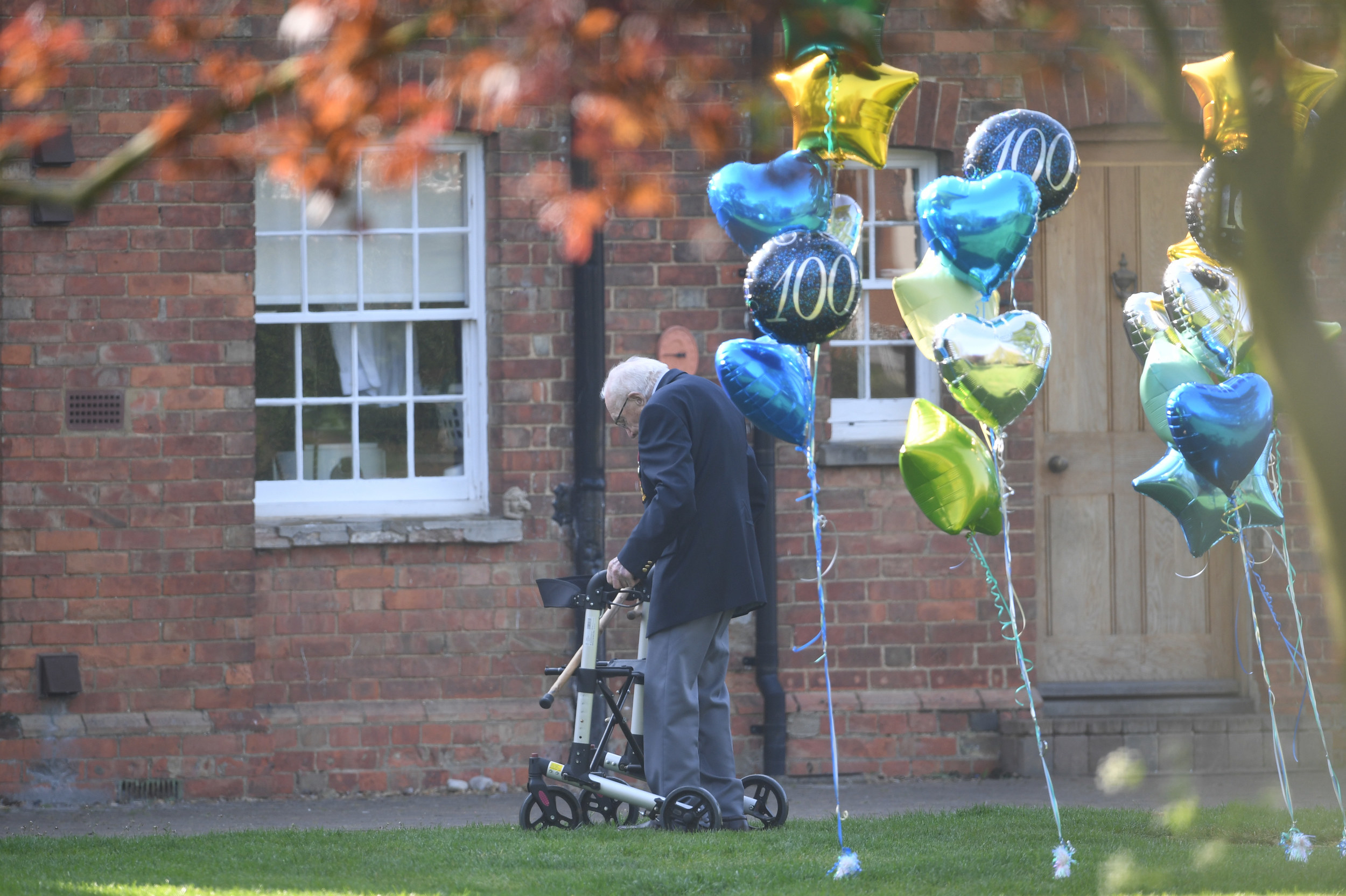 Moore set his initial target at a modest £1,000, but his fundraising page has been absolutely flooded with donations. He has already raised more than £13million.

When he first passed the £1 million mark, his family said in a statement: “We are so thrilled, and so glad to be able to unite our country at such a sad time and all for our incredible NHS. Tom would like to thank all of you, from the bottom of his heart.”

He completed the final laps live on television, with a Guard of Honour.

He's done it! 👏
#CaptainTomMoore has completed his 100 laps before his 100th birthday live on #BBCBreakfast! 🙌
He's raised over £12 million for the #NHS
Well done @captaintommoore from everyone at the @BBC 💕

On Thursday morning, Moore completed the final laps of his garden wearing his army medals, with the 1st Battalion the Yorkshire Regiment forming a Guard of Honour.

Maj Ian Atkins, the officer commanding the troops in the Guard of Honour, said: “The soldiers, standing apart and yet together in support of Captain Tom, couldn’t be prouder to count him as one of their own, and we thank him from the bottom of our hearts for his service to the country, and now his achievements in the name of the NHS.

“The British Army, the NHS and the whole nation has been behind him every step of the way.”

Television cameras from the BBC were there to capture the moment he completed his challenge.

He told reporters he felt “fine” after made his final steps. “I’m surrounded by the right sort of people, so yes, I feel fine,” he said. “I hope you’re all feeling fine too!”

He told the BBC that the donations from the public amounted to “an absolutely fantastic sum of money”.

“I never dreamt I would be involved in such an occasion as this,” he said.

Moore has received messages and support and congratulations from across the country. 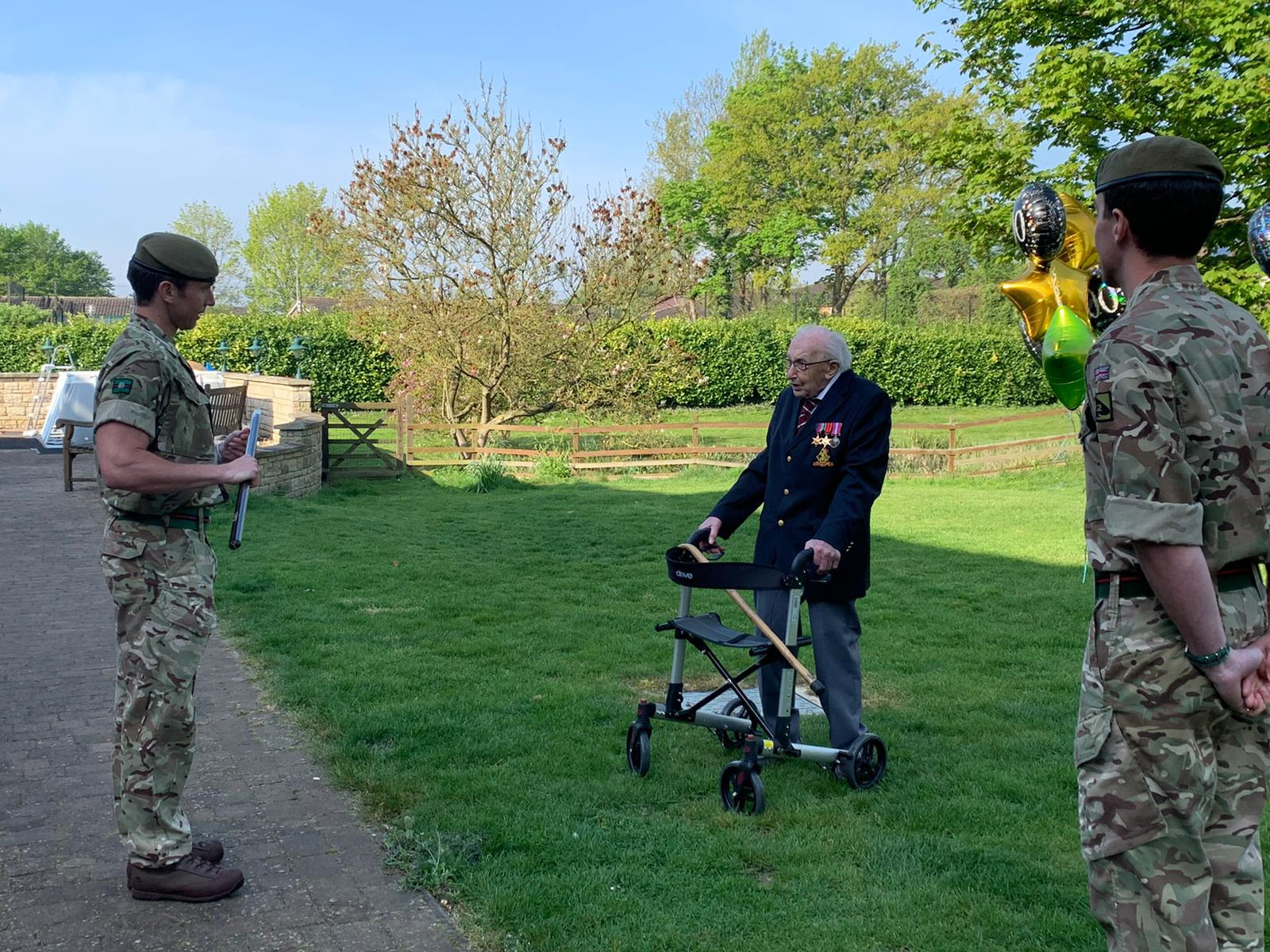 Chancellor Rishi Sunak, whose constituency is in Yorkshire, said: “What you’ve done is extraordinary, and the millions of pounds you’ve raised for the NHS will be put to good use as we continue to tackle this virus together.

“As an adopted Yorkshireman, I’ve come to recognise true Yorkshire grit, and your story is an inspiration to us all, it just goes to show that British spirit is as strong as it’s ever been.”

England cricketer Ben Stokes said: “What you’ve managed to achieve is absolutely fantastic. The funds you have raised for the real heroes today [are] just sensational.

And NHS Charities Together, which will receive the money he has raised, said it was “truly inspired and humbled.”

Chair Ian Lush said: “It’s extraordinary to see the amount of money and the outpouring of goodwill towards the NHS and towards all the NHS charities who will take good care with the money that he’s raising.”